Laurie gets the credit for the topic of today’s post.  She had learned that two of our new students were friends from their undergraduate days.  One of the two, John, is an Admissions Graduate Assistant, who told us, “Courtney and I met during our freshman year at Vanderbilt University and remained friends throughout our time in Nashville.  After graduation, we went our separate ways and fell out of touch.  Three years later, we were surprised to find ourselves together again in the MALD program at The Fletcher School!”  I asked John and Courtney to interview each other, and today’s post is the result. 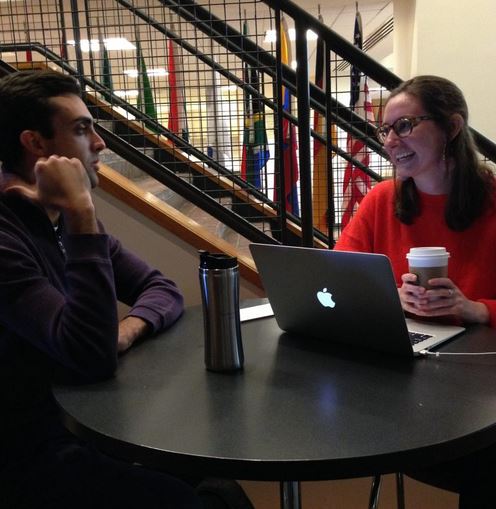 John Zeleznak: We knew each other mostly through Model UN at Vandy, but we actually met first semester in a first-year writing seminar.

Courtney Hulse: That’s right!  But it was a math class.

JZ: So, the real question is: what were we thinking?

JZ: The same thing happened to me!  The writing seminar was called Cryptography.

CH: It was a cool hybrid between a history class, an English class, and a math class.  We did problem sets on basic cryptanalysis, and we also wrote papers on the historical context in which the codes were used.  I liked it because it was interdisciplinary.

JZ: So for the past few years, I’ve been in China, and you’ve been in New York.  When I saw that you were in the Fletcher Facebook group, I messaged you and was like “Oh my gosh–are you going to Fletcher?”  And we reconnected and met up during orientation.

CH: I was so happy to know that I’d already have a friend at Fletcher.

JZ: A friendly face in the midst of the craziness that is orientation.  So tell me what you’ve been up to since graduation.

CH: I actually found out I got a job on the same day we graduated.  I was literally still wearing my cap and gown.  I moved to New York to join the policy team at the UN Foundation.  It was 2014 and the Sustainable Development Goals dominated the work until the agenda was agreed in September 2015.  Then the work shifted to other portfolios, like UN reform and peacebuilding.

JZ: Wow!  What was the most interesting part of your work with the UN Foundation?

CH: My favorite part was witnessing the race for Secretary General because it was much more transparent than it had ever been.  The president of the General Assembly used his position and influence to draw attention and legitimacy to a UN Resolution about reforming the way UN leaders are chosen.  He helped make selection more inclusive.  I followed the race for our organization.  It was fascinating to see these major changes happening from up close.

JZ: I can see why!  Was it your work at the UN Foundation that motivated you to pursue a degree at Fletcher?

CH: I noticed that many of the people who were doing the types of jobs that I eventually wanted to pursue had done graduate programs in diplomacy and international relations.  My boss at UNF had been a professor at Princeton’s Woodrow Wilson School, so the first time I heard about Fletcher was actually at a panel that she was speaking on about IR graduate programs.

JZ: That’s pretty great.  So what solidified Fletcher as your top choice? 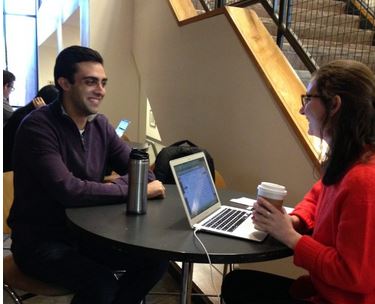 CH: I loved how interdisciplinary it is.  I’ve always been interested in the places where academic fields overlap.  In undergrad, I used political science and anthropology to look at how different cultures interact with each other and to understand public diplomacy.  I wanted to do more of that type of work in grad school.  I also loved how welcoming everyone is.  When I visited, the students I met treated me like their friend.  The Fletcher alumni I met shared fond memories, and it was wonderful to hear that they are still in touch with the with the people they met at Fletcher.  That element of community was something that I really valued and wanted to be a part of.

CH: So tell me more about what you were doing after undergrad and what drew you to Fletcher.

JZ: For the past two years, I’ve been serving with the Peace Corps as an Education Volunteer in southwestern China.  I was teaching at a university in Chongqing, which is a city of about 8.5 million people.  I was teaching mostly oral English, but since my students had pretty solid English skills, my department let me teach public speaking, debate, and negotiation.

JZ: It was such a great experience, not only teaching English, but focusing on these specific skills and trying to get my students to be comfortable speaking English in a more informal setting.  I enjoyed getting to know my colleagues, my students, and exploring China.  My counterparts and I hosted a Peace Corps international creative-writing competition, convened discussion groups, and held holiday parties.  I think language study in China is very different than in other parts of the world, so one of the focuses of my service ended up being to encourage my students and colleagues to have fun with using English in unscripted situations.

CH: That’s really interesting. So what drew you to Fletcher?

JZ: After undergrad, I knew I wanted to get a graduate degree, but I was unsure about what to focus on.  I didn’t want to commit time and money to a degree that I wasn’t passionate about, so I took some time.  While I was in China, I realized I had a strong interest in forced displacement and migration, which may have stemmed from the experiences I had working with resettled refugee communities during undergrad.  I was looking at programs that had a strong background in international affairs, but that allowed me to focus on that subject.  Still, I recognized that there was a good chance that I would change my mind — being abroad for so long, readjusting to the U.S., and being back in an academic environment.

CH: So you didn’t want to commit to a program that only focuses on refugees and resettlement.

JZ: Exactly.  The interdisciplinary features of Fletcher’s curriculum were a big draw for me as well.  I was also really impressed by the Fletcher community and how it was highlighted at career fairs and virtual information sessions.  I had heard from current students about how there were a lot of opportunities to get involved on campus and that the student community is really active.  Having a strong sense of community was one of the reasons why I ended up at Fletcher.  There is also a large Returned Peace Corps Volunteer community here which has been really great as I readjust to life in the U.S. and life as a grad student.

CH: That’s so important.  This transition can be really stressful — from applying to deciding to moving to actually starting school. 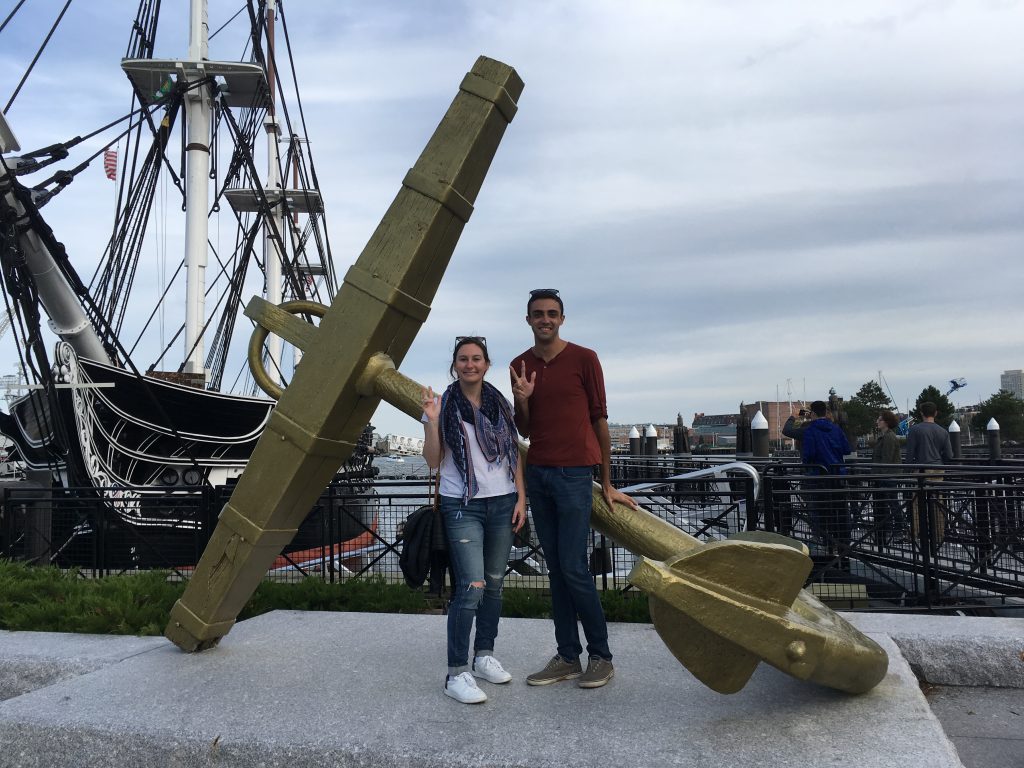 JZ: Absolutely.  So, if you could give prospective students one piece of advice about applying to graduate school, what would it be?

CH: Talk to people!  And, if you can, visit.  I know that’s not feasible for everyone, but I remember when I visited thinking that these were my people.  Seeing campus really solidified my decision to come here.  If that’s not an option for you, talk to people who’ve gone through this experience.  Fletcher alumni are all over the world, and they love talking about their time here.

JZ: I would also say really get to know your program.  Know your school, but really know the opportunities that exist within your program, both with regards to the curriculum and to your career goals.  You don’t have to know exactly where you’re going, but you do need to think about how a program might help you get there.

CH: I really love that Fletcher has a required Professional Development Program during the first semester.  The staff urges us to ask ourselves questions about what we want to do and how we can structure our time here to prepare ourselves for a career in international affairs.  I’ve found it useful to be considering these questions early on.

JZ: I agree.  There’s a lot of self-reflection, and that’s been really helpful.

CH: If you can figure out where the gaps are, you can make a plan for filling them.

JZ: At this point, we’ve been at Fletcher for almost a semester.  What’s been your favorite part of your classes, your time on campus, your time in Boston?

CH: Probably the speaker events.  I’ve loved hearing from the impressive people who come to campus and from the professors who are already here.  They’ve spoken on such a wide range of issues and current events, and they’ve been very candid.  It’s also been fascinating to hear about the experiences that other students have had

JZ: For sure.  Everyone here has such different backgrounds, and yet, we seem to find a lot of connections.  Whether it’s working with the same person or living in the same part of the world or concentrating in the same fields, the people at Fletcher make the world seem a little more connected.  And I guess the fact that we both ended up here is a good example to make that case!