It has been a while since the blog featured a Five-Year Update, and I’m excited to kick off the profiles from the Class of 2012 — a group that seems especially full of wonderful people.  I’m extra pleased that the first of these posts comes from Vanessa Vidal Castellanos, whom I interviewed for her MALD application in 2011 and I’ve been in contact with ever since.  Vanessa is currently serving as a U.S. Foreign Service Officer.  When she was a student, she appeared in the Admissions Blog before running in the Boston Marathon. 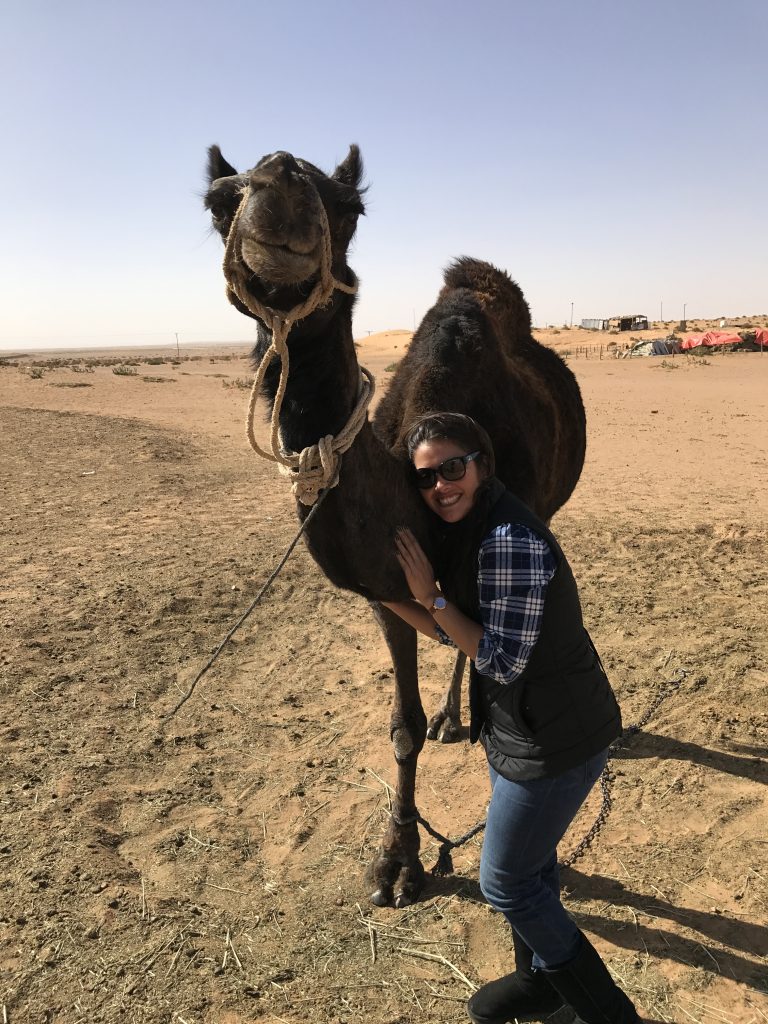 This Five-Year Update is written from Riyadh, Saudi Arabia, where I have been since September 11, 2017 — such an important date for many around the globe.  As I booked my travel to permanently change stations, the travel agent hesitantly asked:  “Are you sure you want to travel from the United States to Saudi Arabia on September 11?”  Honestly, the significance of that date hadn’t crossed my mind.  I thought back to exactly five years earlier when I swore to defend the Constitution of the United States of America on September 11, 2012.  That day, as I prepared to introduce our speaker before the swearing-in ceremony for the new Foreign Service officers like me, I choked and contained tears while watching on television as then President Obama and the Secretary of State received the bodies of those who had been killed in service in Benghazi, Libya.  It was at that moment that I realized how honored and proud I was to be joining the diplomatic corps of the United States.

My diplomatic career began after my admissions interview to The Fletcher School, which is when I first considered the U.S. Foreign Service.  I knew I wanted to work in public service, but also knew something was missing from most of the jobs I had heard of, and that was the international component.  Thanks to Jessica, who encouraged me to apply for the Pickering Fellowship after my admissions interview, I became a Pickering Fellow.  After graduating from Fletcher, I joined the U.S. Foreign Service — exactly the career I had dreamt of, I just didn’t know the name for it.  I went on to complete an internship at the operations center in Washington, DC, covering East Asia and the Pacific, but in tune with everything that was happening in the world.  I remember every day was something new, and briefing high-level officials as an intern was nerve-racking to say the least.  I questioned if I would be able to fulfill my five-year contract as part of the Fellowship.

After serving in various capacities at U.S. embassies in Tunisia, Switzerland, Zambia, and now in Saudi Arabia, I understand and appreciate the value of diplomacy to create mutual understanding between the people and governments of different countries.  I absolutely love engaging the people of the host country, hearing about their needs and dreams, and finding ways the U.S. government can provide support.  I have always said the United States is not a perfect country, but we have tons to share and I am glad to have resources at hand that I can offer and that mutually benefit others and the United States.  It’s not always as easy as it sounds.  Sometimes perspectives are controversial.  However, having people-to-people conversations about those standpoints and then influencing U.S. foreign policy, even if only in the slightest, is reassuring.

There is no question that without my education at Fletcher — thorny and touchy discussions, mock chief of staff meetings, public diplomacy, negotiation simulations, and sample policy briefs — and the network of friends I built, I would not have this diplomatic career.  The Fletcher community at the Department is real and truly vibrant.  (I always had my doubts if it could live up to the hype, during the annual Fletcher D.C. networking events.)  I am grateful for my Fletcher experience and the international worldview it gave me; I could not imagine my life without it!

Check out Vanessa’s video, which the U.S. Embassy shared on its Facebook page.  It’s from a series in which Embassy staff share details about their home towns.