Continuing the student bloggers’ fall-semester recaps, Prianka reports on her first semester and some of the special activities open to students in the LLM program.

One semester down and just one more to go.  Saying that time flies would be an understatement.  The last semester was definitely challenging, but in all honesty, had it been anything short of challenging, I would have questioned whether I was doing something wrong!  Being the first Admissions blogger from the LLM program, I thought I would talk about my experiences thus far at Fletcher.

Fletcher’s LLM program is not a traditional LLM program.  The most obvious difference is that Fletcher is an international affairs school and, by virtue of the same, the courses on offer are not restricted to legal subjects but are also in economics, international business, diplomacy, history and politics.  How does one pick just eight courses?  And if that weren’t enough, Fletcher students also have the option of taking courses at Harvard University.  This has its positives and negatives — definitely more to choose from, but it often makes me feel like a kid in a candy store on a budget!  Despite being happy with my four carefully selected different types of candy, I still wonder whether I would have been happier with one of the other candies, particularly one of them that seems to be selling out fast.

Looking back at some of the main reasons I decided to study at Fletcher — the number of students enrolled in the program, the interdisciplinary nature of the course, the presence of faculty in the area of law that I was interested in — I consider that I was right in my reasoning.  These are also some of the factors that differentiate the LLM program at Fletcher from the LLM program from a law school.

The education that one gains from a graduate school experience is not restricted to the courses on offer but also from conferences and guest lectures.  Being part of an international affairs school, we’ve had a number of prominent personalities deliver lectures, including the current Croatian President, President Kolinda Grabar-Kitarović and others described in previous blog posts. 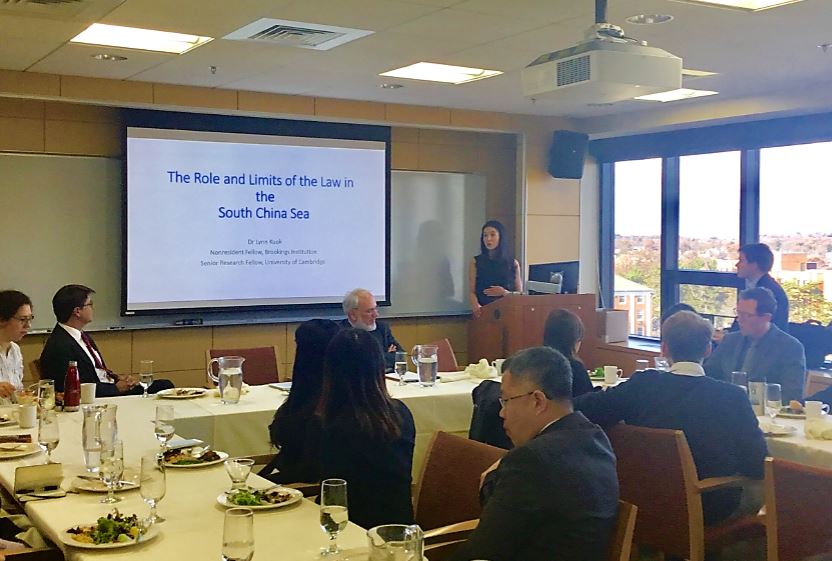 The LLM program also organizes High Table lunches based on, to a certain extent, the particular interests of the current student cohort.  Last semester we had the opportunity to hear from Mr. Alberto Mora and Dr. Lynn Kuok, F04, at High Table lunches.  While Mr. Mora spoke about the legality of enhanced interrogation techniques, with Dr. Kuok we discussed competing national, legal, and political interests in the South China Sea.  The High Table lunches are quite exclusive and intimate, with only the LLM students and the law faculty in attendance.

Another interesting event that the LLM program participated in was an International Law Weekend in New York.  Not only was this an opportunity for some of us to visit New York for the first time, but we also attended discussions over the course of two days on the theme of “International Law in Challenging Times.”  With each of us having interests in varied fields of law, the event had a little something for all.

Last but not least, we also have dinners hosted every now and then that give us the opportunity to get to know each other, and to interact with the law faculty in a more informal setting.  In the first few weeks after we began our Fletcher journey, Professor Antonia Chayes hosted a dinner for the LLM batch to meet each other as well as the law faculty.  Towards the end of the semester, Professor Burgess and his wife hosted a holiday party at their home.  The dinner was a nice end to the semester, but left me personally grappling with the fact that I was half way through my LLM journey.  I remember back in Orientation week keeping an eye out for students with red LLM folders amongst the sea of 200 students carrying black MALD folders; seeing all the red folders in one place was comforting, particularly in the first few days when everything seemed unfamiliar!

This brings me to my bucket list, described in my first post.  Nearly four months gone, a couple of check marks in and a couple of new additions to the list.  I did go for my first Black Friday sale but, most disappointingly, didn’t stand in a queue to get in or even wait in a line to check out, but did leave with more bags than I anticipated!  I also did buy my first lottery ticket but, sadly, lady luck wasn’t on my side that day.  Building a snowperson still remains on the list and, by my next post, I hope that I check it off.  A couple of new additions to my bucket list are to go for an ice hockey game and, if I can muster up the courage, to go ice skating.  After a couple of falls just walking in the snow, I’m very wary of going on the ice!