Students returned yesterday from their Spring Break week and I think we all share a common shock that we can see the end of the semester ahead of us.  On the other hand, January seems so long ago.  Today, Student Stories writer Kaitlyn reports on her second semester in the MALD program, one in which she has tested her organizational abilities.

It is spring semester at Fletcher, and I am the equivalent of a “sophomore” in my MALD degree, with a quarter of the program behind me.  Naturally, I did the exact same thing with my class schedule that I did as an actual sophomore in undergraduate.

I thought too many classes were interesting and decided: Heck, I’ll just take them all.

Fletcher allows you to do two cool things: take an extra half-credit class once in your MALD program, and audit language classes next door at Tufts’ Olin Center.  I wanted to do an extra half credit now, so I could have an easier schedule next year when I do my capstone project.  And I wanted to audit a French class so I could have a bit more practice before my internship this summer.

When I scheduled my classes, I ended up finding three half-credit courses that looked interesting.  Those, plus French, left me with a schedule of seven classes for the semester: three full-semester classes at Fletcher, French, and three half-semester modules.  (Most people take only four or five classes each semester.)  All of my friends who saw my schedule looked at me like I had three heads.  I admit: it did become somewhat of a juggling act during midterms, but it was not half as bad as people assumed.  And a major reason I was able to manage that course load was organization.  I made two big decisions that made my semester go much smoother: I optimized my study space, and I planned each week so I could balance studying and free time. 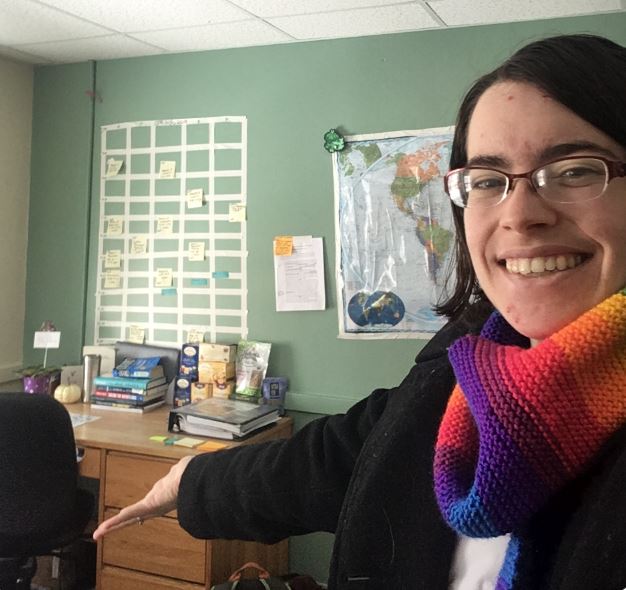 During my first semester, I had my desk in my room, which wasn’t the best place to study.  I felt too comfortable to do work.  And then in my free time I was constantly looking at my desk, thinking about work.  So I was less productive and more stressed.  This semester, I decided I needed to change it up a bit.

Bless my roommate.  She was very accommodating and let me move my desk into the corner of our common room.  And she let me put up two calendars up on the bigger wall out there.  I had a dry-erase calendar for the month, and a huge weekly schedule of sticky-notes over the desk.  This helped me develop a really organized study routine.  Every Sunday I wrote down the new weekly schedule, and each morning I could check both calendars as I walked out the door.  It was much more efficient for me than leafing through a weekly planner that often got lost in my backpack.  Having a clear separation of my work and my study space also meant I was more productive when I studied.  And it meant I got to leave my school work — even my laptop — in a different room at the end of the day.  That helped me feel more relaxed in my free time.

Every week, I had an average of three classes a day, Monday to Thursday.  And starting in March I had one class on Fridays, too.  It meant that generally, I had readings to do every night.  That was a long week by anyone’s standards and I knew I needed to make sure I didn’t get burned out.  So I had one goal: plan one night off in the middle of the week.  I found that it made me more productive when I had something to look forward to, and it was a great way to make sure I could go to extracurricular events: Social Hour on Thursdays; 101 discussions on historical issues that the Student Council organized; and parties hosted by other Fletcher folks.  The best one was the celebration of China’s Spring Festival that my roommate helped organize in February.  I planned my week around that party, and had time to bake a cake for it, too. 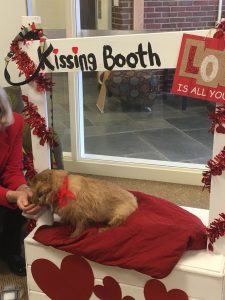 I also had to get creative about my study time.  Mondays, when I had four classes, even working at my reorganized desk was a struggle.  So I got off campus.  Davis Square is a lovely 20-minute walk from Fletcher and it has great coffee shops, perfect for getting my class readings done after my long Monday schedule.  There is also Mugar Café in the Fletcher building, which became my go-to place to study between classes.  It’s also close to everything, which was excellent for taking study breaks to head to on-campus events.  My favorite event was the Puppy Kissing booth that Ginn Library hosted for Valentine’s day.  (Nothing is better for productivity than spending time with a puppy.  Fact.)

All in all, managing my seven classes is just as much about my study time as it is about my non-study time.  I love all my classes, and though I’ll happily not take so many in future semesters, I don’t regret the packed schedule in the slightest.