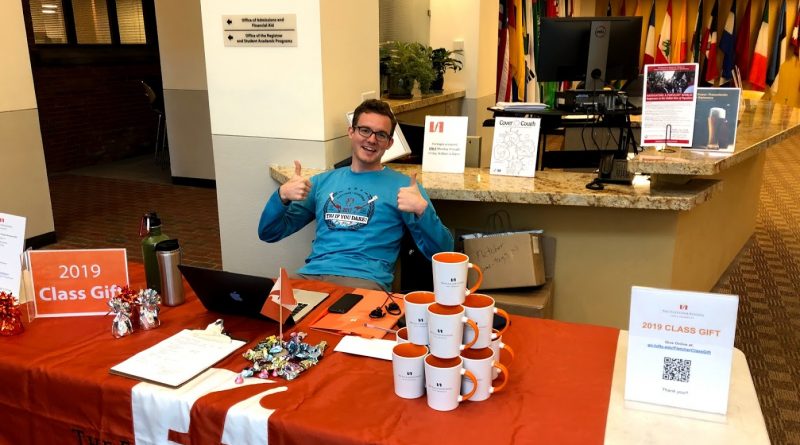 A recommendation I often give prospective students during their visits to Fletcher is to take some time just to hang out in the Hall of Flags between visiting classes, chatting with students over coffee, meeting with faculty members, and talking to us. Regular blog readers will know I’m big on the idea of “fit” between school and student, and fit can sometimes be a function of intangible qualities of a place that might not come through as much in more formal or structured meetings. Sometimes a place can just feel more right to you than another. I imagine the Hall of Flags to be a good barometer of the general feeling and energy level of Fletcher at any given time, and my hope is always that a casual stretch of downtime there will show prospective students that Fletcher is where they want to be.

But that’s just, like, my opinion, man, so I figured it would probably be a good idea to test my hypothesis. One morning late last week I relocated to the Hall of Flags to see who or what might turn up over the course of a couple of hours. While Friday morning happened to be when I was available, I realized it might not be the ideal time for Fletcher people watching. Friday classes have increased over recent years, but it’s still often a bit of a slower day in the week.

The fact that it’s cold, rainy, and generally unpleasant out, and also the penultimate day of classes for the academic year, makes me think I might have chosen poorly for this experiment. I make a beeline for a table with one of the most conveniently-placed power outlets, only realizing after I’ve set myself up that I’ve made the mistake of sitting directly in the sight line of the wall-mounted TV that’s typically tuned to CNN all day (on mute, fortunately). The nonstop political chyrons get pretty aggravating pretty quickly, and I marvel at our Staff Assistant Sherri’s composure to withstand it for the bulk of the day, situated as she is at the reception desk located directly below. She gives me a puzzled look and wonders if I’ve been kicked out of Admissions. 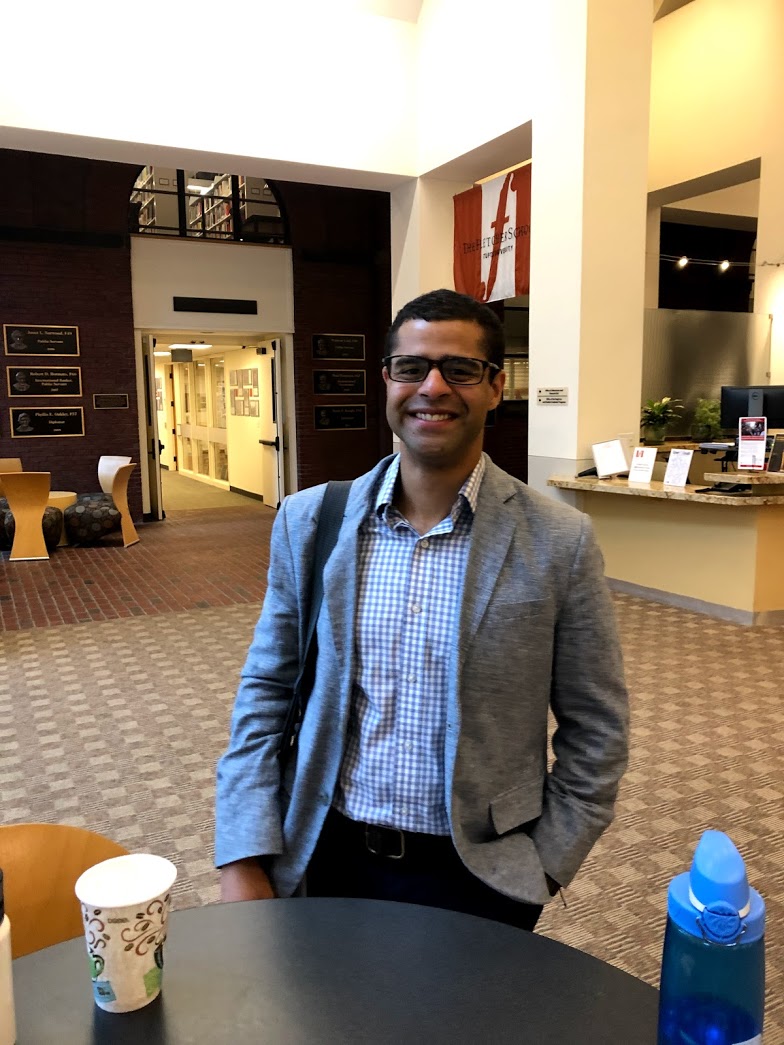 Fortunately, I get quickly diverted from the outside gloom and absurdity of the day’s headlines by second-year MALD student Ekow passing by. I recall meeting him a few years back when he was a prospective student, and chatting with him again during orientation. We’ve crossed paths frequently in the intervening two years, but nearly always as ships passing in the night, rarely with time for more than a friendly nod and wave across the Hall of Flags. He always seems to have a smile on his face, and I learn there’s good reason for it. He A) turned in his Capstone a few days ago, B) has had several job interviews recently, and C) is getting married this summer! Those are some major to-do list items he’s checking off, and it wasn’t surprising to find him not overly stressed about his remaining final exams and papers due over the next week or so (though he did acknowledge needing to put in some more time on the wedding planning front).

I notice a lot of faculty bustling about, too. Not atypical, though for early-ish on a Friday, the traffic seems a bit heavier than I’d expect. I soon recall that there’s an all-day faculty retreat happening, which explains why in the span of barely twenty minutes I’ve seen Professors Richard Shultz, Edward Schumacher-Matos, Leila Fawaz, Karen Jacobsen, Jette Knudsen, Jenny Aker, Monica Toft, and Jeswald Salacuse. I also chat for a few minutes with my pal Prof. John Burgess, with whom I work closely on the LLM program. John is the Executive Director of the LLM, and around this time of year we’re in touch frequently regarding enrollment details of the new class, communications and outreach, and planning for the coming year.

By mid-morning, student traffic is picking up, with lots of people busily heading here or there. I manage a few quick waves and shouts across the Hall to LLM student Kudrat, on her way to some sort of meeting or event, MALD student Natalia, strategizing on which building exit will minimize her exposure to the rain, and MALD student Padmini, hurrying around trying to find her study group that apparently was meeting unexpectedly elsewhere. I also get the chance for a quick chat with Kristen, a long-time admissions colleague who has since moved on to manage the launch of Fletcher’s new online business degree. This is great for Fletcher (both the program launch and the fact of Kristen leading it), but it’s been a loss for our office, as we don’t see her quite as often as we used to. While Kristen was headed off to one of the many, many meetings that occupy her time these days, she did remind me that she’d previously served as Jessica’s wing-woman in past Hall of Flags research sessions, and gave me a bit of good-natured (and well-deserved) grief for failing to loop her in this time around. I’m lucky that she’s quick to forgive, and if I play my cards right, it sounds like I can count on some backup for future blogging expeditions. 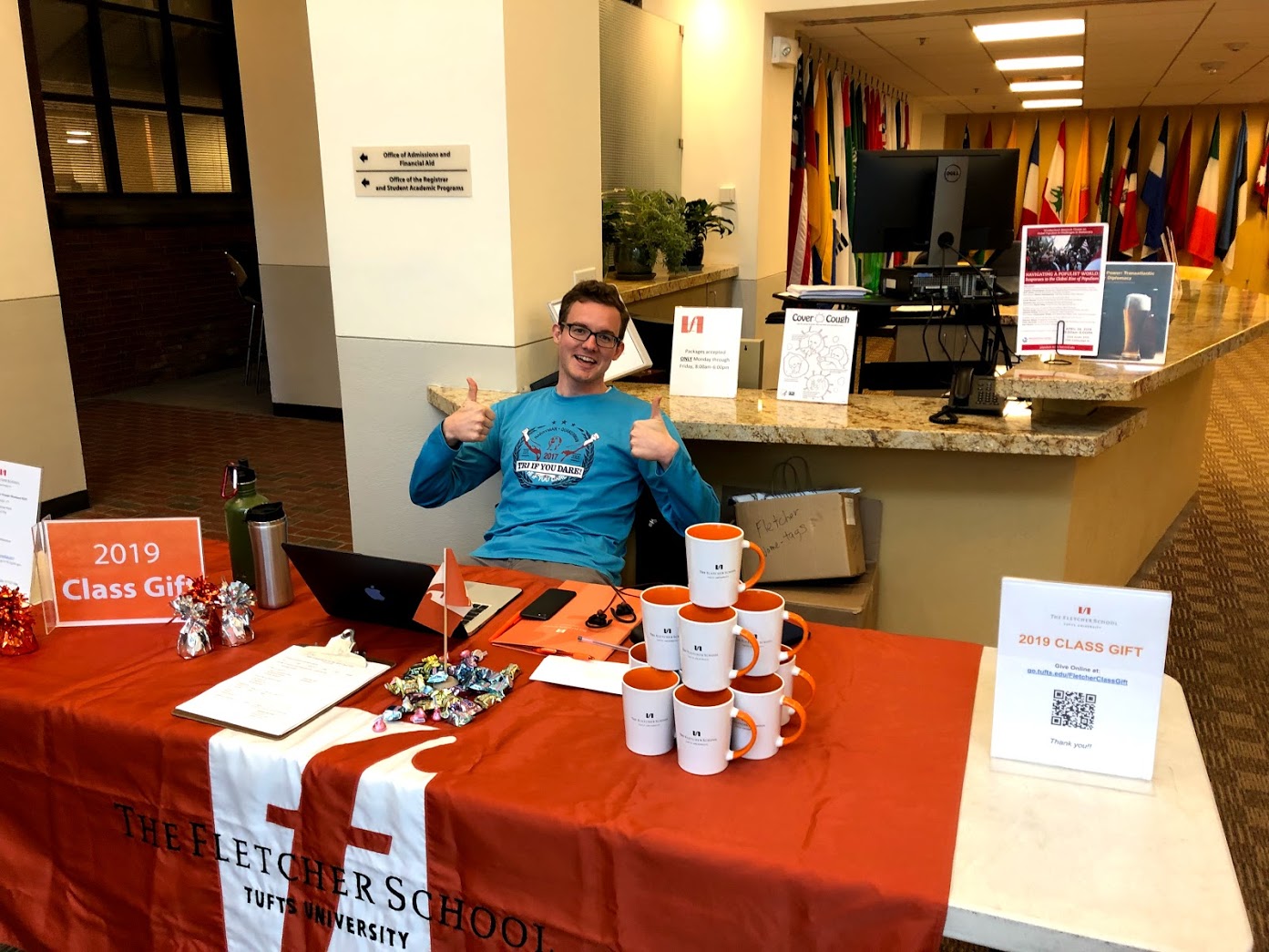 It’s not long before I see MALD student and big-time Friend of Admissions Cameron heading over, lugging a table and a few boxes of miscellaneous supplies; he’s clearly setting up for a Hall of Flags session of his own. It turns out to be for the Fletcher 2019 Class Gift committee. It doesn’t surprise me to see Cameron involved in that effort, as he’s involved in a ton of things at Fletcher. For our office alone Cameron has been a student representative on the Admissions Committee, and also served as an Admissions Ambassador and interviewer for prospective candidates. He’s one of the nicest and most positive people around Fletcher, which enables him to smile and seem completely relaxed as he ticks off the remaining things he still has to do before graduation (which include several term papers and exams, as well as putting the finishing touches on his Capstone). I guess scoring a job interview prior to graduation can help put things in perspective, though it doesn’t make the home stretch schedule any less hectic, surely.

Even at a point of peak stress in the semester, the Hall of Flags remains a good hang. All in all, there are worse ways to spend a morning.