With today’s post, I’m returning to our occasional Faculty Spotlight series.  These posts are designed to bring out an aspect of the professor’s background or experience at Fletcher that goes beyond the basics of a c.v.  Today we’ll hear from Lawrence Krohn, Professor of Practice of International Economics, who currently teaches Introduction to Economic Theory, Macroeconomics, and Macroeconomic Problems of Middle Income Countries: Focus on Latin America. 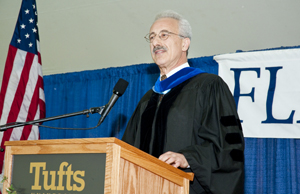 I was smitten at 17.  Deeply in love.  The University of Pennsylvania’s economics faculty, however eminent, was not my inspiration; in four years, I hardly ever saw them.  It was the subject matter itself that seduced me.  Only much later, over the years, did I discover that this strange passion, this way of viewing the world, was shared by economists of wide-ranging personalities, nationalities, political persuasions.  I suspect that my colleagues in economics at Fletcher feel just as I do.

Many individuals of humanistic persuasion, knowing economics only by reputation (often as the “dismal science”), might well wonder what sort of person could be enthralled by money and finance.  Therein lies the error: economics is only superficially about money and finance.  Its ultimate domain is that of human wants and our world’s highly constrained ability to satisfy them.  Many emotions are thereby touched; economics is about people.

The so-called economics “imperialists” among us maintain that most issues that do not appear economic in nature are indeed so at their core. I don’t share this extreme position, as it implicitly depreciates other perspectives I respect, such as the political, social, and psychological.  But I do agree that few real-world phenomena are without important economic aspects, so the tools of economics remain indispensable to all thinking persons, not least those pursuing a curriculum of international affairs!

Economic modeling daunts some students – but without good reason.  Modeling is a tool of simplification, not complication.  It reduces often complex issues to their essentials by paring away the irrelevant, while retaining strict logical consistency.  Yes, at modeling’s highest professional levels, complex math is unavoidable.  But models a Fletcher student will encounter rely on basic accounting (high school algebra with some clothes on) and a few simple, but powerful, assumptions about the behavior of consumers, firms, and governments.  Thus, fear of models is unwarranted and the intellectual reward to a modicum of concentration on them is high.

I’ve been doubly fortunate: first, to have had two entirely complementary careers — the longer one, as international economist for several global banks, sandwiched by two stints (including the present one) in academia.  As a former academic, I was well equipped for the simplification required to explain complex economic phenomena to portfolio managers who, their energy and intelligence notwithstanding, were in no way trained economists.  Conversely, at Fletcher since 2005 (full-time since 2008), I have been able to draw amply on my real-world experience in global finance.

Second, I was lucky as well to have stumbled fortuitously onto Latin America in the 1980s, despite the lack of any ethnic or other association with the region.  What a laboratory for economists that continent has always been and remains!  Its problems, like those of other middle-income nations, have been related to, but still distinct from the more familiar ones of industrial nations.

With hindsight, it is relatively easy to identify policy errors that have been made; more difficult to define optimal policies.  Whenever I deal with economic policy — even in a developed-nation context — I start from the premise that governments almost always execute policy inefficiently (often corruptly as well).  Alas, given the myriad real-world departures (called market distortions or imperfections) from market fundamentalists’ Smithian ideal, unfettered market forces also prove notoriously inefficient, and are often, moreover, perceived as unfair (admittedly, a subjective notion).

So the question becomes for each contemplated policy, how much state intervention is desirable.  Where should the line be drawn between the completely planned economy and laissez-faire?  Honest and well informed observers can legitimately disagree on the answers, which is what makes economic debate so endlessly fascinating.