Continuing our return to spring break, along with yesterday’s post by McKenzie, today we’ll read about Tatsuo’s trip to Israel and the Palestinian territories.  Fletcher offered a trek to this region, but Tatsuo will explain that he ended up joining students from Harvard Kennedy School for their trek.

Over the recent spring break, Fletcher students organized a Fletcher Policy Trek to Israel.  I applied for Fletcher’s trek, but I wasn’t accepted because there was a lot of competition for the available places; however, I had another opportunity to join such a trek to Israel, through Harvard Kennedy School.  Many events at HKS welcome the participation of Fletcher students.  I think that having access to the resources of one of the world’s largest universities is a big advantage of Fletcher.

In line with this, I eventually joined HKS’s Israel trek.  It was a little more costly than that of Fletcher because of the size.  (HKS’s trek had over 100 students, while Fletcher’s trek is limited to about 50 participants. The funding resources were about equal, which meant I needed to pay more.)  But the places we visited were almost the same and I was also pleased to make friends with enjoyable and interesting students from HKS and other Harvard schools.

I knew something about Israel and the neighboring Palestinian territories as a Japanese public officer and a student of international relations.  However, through the entire trek, I realized that knowledge from books (or the internet) is just knowledge itself.  Everything I saw, everywhere I went, and everyone I met were interesting, thoughtful, and impressive. 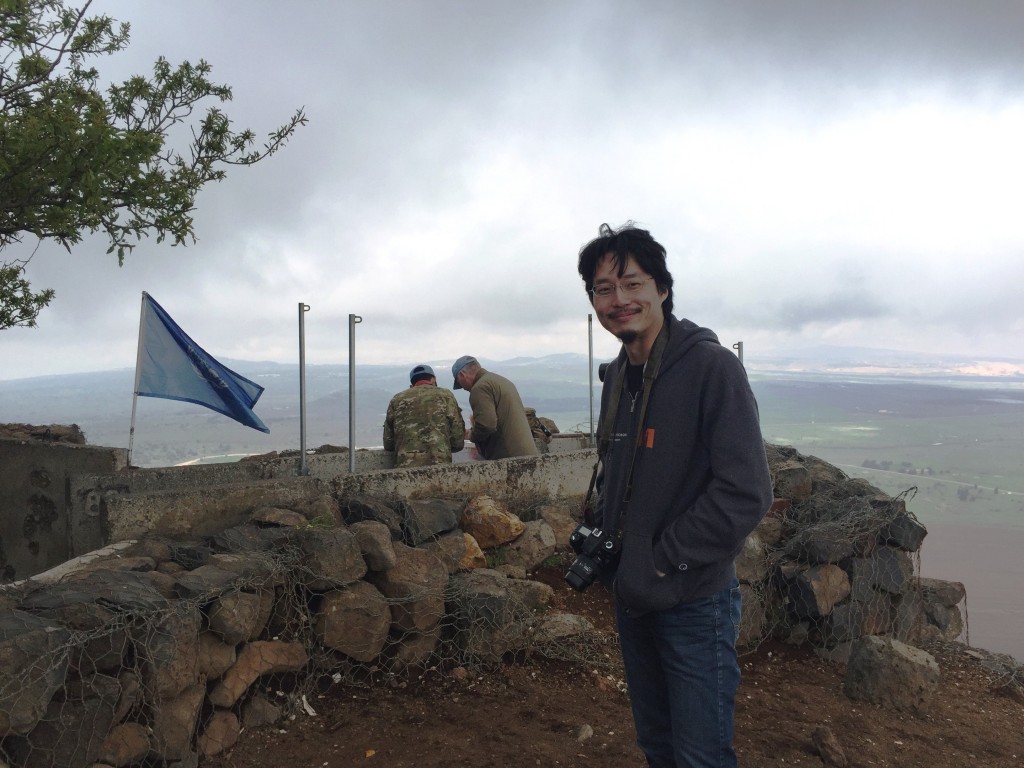 In an area of Israel near the Gaza district, we saw concrete-covered bus stops and other shelters to avoid rocket bombing from Gaza.  The IDF base at the Gaza border crossing had a very serious atmosphere.  On the other hand, in the Golan Heights, the other area fronting a conflict zone, we were surprised by the peaceful scenery.  We drove through an old Syrian Army headquarters, trenches, broken battle tanks, and dead villages.  We also saw an ISIS controlled town, Quneitra from the top of the hill in the Golan Heights.  The Syrian Army and ISIS are still fighting over the area, but UN peacekeeping officers seemed to be relaxed and welcomed us to take a picture with them.  There were also many tourists chatting and drinking coffee.  The contrast between the peaceful scenery, old military facilities, and the ongoing conflict area was very strange. 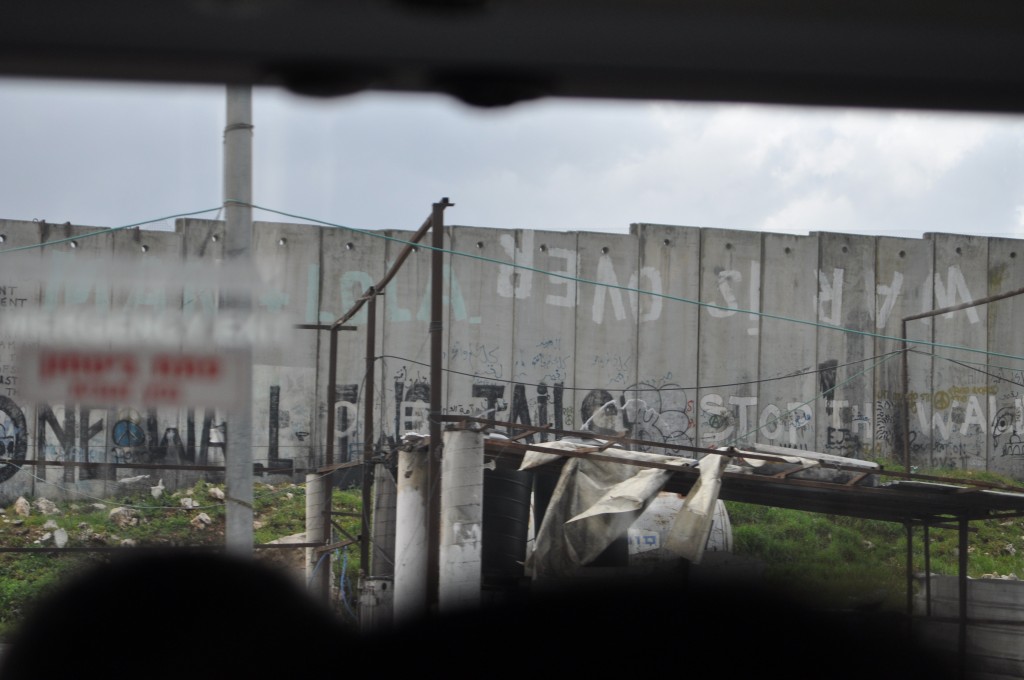 The contrast between the Palestinian areas and Israeli occupied villages in the West Bank was also thought-provoking.  Over the separation wall/security fence, we faced an undeveloped and struggling community.  Almost all buildings placed black plastic tanks to store water on the roofs.  The landscape with many steep hills seemed to be hard to cultivate.  By contrast, the Israeli villages were well developed, beautiful, and clean.  I had already understood that the Israeli people enjoyed well-developed lives, unlike those of the Palestinians.  But I was moved by the clear and sad contrast in very close vicinity.

When we walked around the old city of Jerusalem, the guide said we walked on the floor of the Jewish district and on the roof of the Muslim district at the same time.

Israel is very small country.  We could see the skyscrapers in Tel Aviv from the hills of the West Bank.  However, I was surprised by the power of Israel.  I don’t mean the military power.  There were modern and developed cities, well-maintained infrastructure, beautiful cultivated fields, and green forests.  I heard that most trees in Israel were specially planted, not wild.  Compared with other Middle East countries that I have been to, the land of Israel seemed to be an oasis in the desert.  I was impressed by the power but I also felt mixed emotions.  The oasis did not benefit the surrounding region and people, including the Palestinian people, unlike a natural oasis that can feed anyone who visits there. 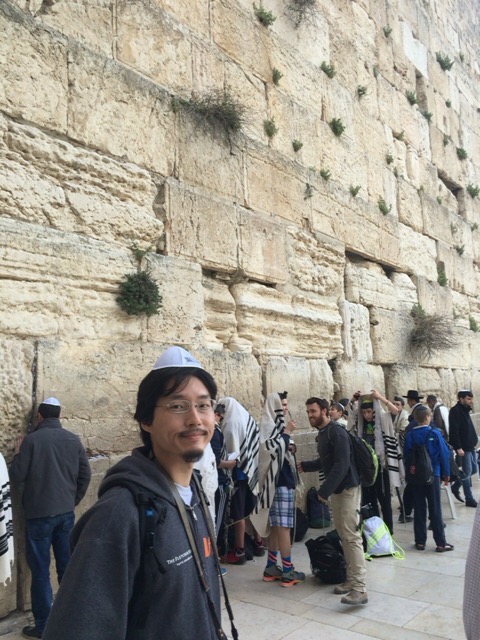 While I was moved by such interesting but complex experiences, I also enjoyed the trek by swimming in the Dead Sea, riding camels, and of course, eating and drinking!  In particular, the region has a lot of historical sites.  Masada, the ancient fortress of Jewish rebels against the Roman Empire was one of the most interesting places for me.  I climbed the hill using the ramp that the Roman Army built for attacking thousands of years ago, and from the steep edge, I observed the walls and camps of the great empire.

The entire trek was a very nice opportunity for me.  Although I could always visit Israel by myself, on the trek I visited places that would be hard to go to if I went by myself.  I met people who are too busy to meet with a typical tourist such as Salam Fayyad, the former prime minister of the Palestine Authority, and Yair Lapid, the former minister of finance of Israel.  And I shared the time and my feelings with many interesting Harvard friends.

Now, I am still struggling to catch up on the tasks that I had to skip because HKS’s spring break was one week before that of Fletcher.  But the trek was surely worth the hard work.  If you will be at Fletcher next spring, I strongly recommend that you join Fletcher’s or HKS’s Israel Trek, or another interesting study trek that might be offered!