Due to a little disorganization on my part, I’m only now sharing a wrap-up of the spring semester that Tatsuo sent me in June.  With apologies for my delay, let’s revisit Tatsuo’s extremely busy semester.

My second semester at Fletcher is over and half of my study in Medford/Somerville has quickly passed.  I realize that the phrase “time flies” is true.

Many friends in the MA and LLM programs and second-years in the MALD have left the School.  I was a little surprised that few first-year students were at commencement.  In my home country, first-years would also attend such an event to say goodbye to students who are leaving.  Maybe Americans like more casual opportunities to say goodbye to their friends and they think formal events like commencement are mainly for families.  On the other hand, we Japanese (and other East Asians?), think that formal events such as commencement are good opportunities to say farewell to each other.  For our families, we like more casual settings.

Looking back, this semester was very fruitful for me.

My first Field of Study is Law and Development; however, I am also interested in another area of international relations, Maritime Affairs.  The economic and cultural prosperity of Japan largely depends on the sea surrounding our country.  The ministry that I work for is also responsible for the vast area of maritime issues, from the shipping industry to marine leisure to maritime security conflicts.

Unfortunately, Fletcher does not offer a Field of Study in Maritime Studies, even though the school has some highly experienced professors in the area.  Fortunately, the School allows students to design their own Field of Study.  Thus, I combined some relevant courses and designed my tailor-made Field of Study, “Modern Maritime Issues and American Foreign Policy.”

I took four and half a credits this semester: Global Maritime Affairs, which was the core of my self-designed Field of Study; Science Diplomacy, another course for my Maritime Studies Field; The Foreign Relations of the United States Since 1917, which was the last class for Professor Henrikson; International Investment Law; and Islamic World (0.5 credit).  I took the last two courses for my interest in development studies.

For non-native English speakers, especially Japanese students who were accustomed to a more passive style of study in our college and high school education, it’s difficult to join the discussion in large classes (although at Fletcher, “large” means only 20 to 30 students in a class), so I try to take at least one small discussion class each semester.  Science Diplomacy, led by Professor Berkman, had only around ten students, and the lectures and discussions were friendly and easy to join.  The class focused on issues concerning the Arctic Ocean and the relationship between science and diplomacy.

Fletcher offers a lot of courses dealing with diplomacy or negotiation, but Science Diplomacy was unique for two reasons.  First, the course dealt with scientific results and methods to use them in diplomatic negotiations.  Most of us at Fletcher are not scientists and do not have science backgrounds.  At least in my country of Japan, we (political or legal professionals) tend to think that scientists live in a different world.  When I was a college student, I was interested in connecting people and studies in the arts and sciences.  I helped to organize a forum on outer space development that gathered many researchers and students with different backgrounds, to improve exchange among them.  The perspectives in Science Diplomacy at Fletcher awoke that interest again.

Additionally, Science Diplomacy focused on “common interests” for all the participants.  In most diplomacy case studies, we have to define certain interests for each participant in the negotiations, even if these negotiations are not zero-sum games.  However, this course provided another perspective on participants’ interests, by introducing the context of science.  It was thought provoking for those of us struggling over global issues with many deeply intertwined interests.

Outside of classes, I joined a project led by Harvard Law School’s Law and International Development Society (LIDS).  For the project, our team drafted policy guidelines for local stakeholders in Afghanistan seeking to promote community development in resource-rich areas cooperating with local government and mining companies.  It was a very interesting practical opportunity to learn how we could use legal skills to tackle issues of international development.  Thanks to the instruction and support of CLDP, the U.S. agency that provided the project to LIDS, I learned a lot, from Afghanistan’s unique practices to global issues for mining-community development.  On the other hand, I was afraid that our work could deprive Afghan stakeholders of an opportunity to develop legal and policy skills.  When I was a young officer of the Japanese Government, I drafted a lot of policy papers and guidelines.  I could not complete the work alone because of my inexperience, and I had to draw on support from my boss and colleagues.  As a result, over time, I acquired the skills I needed to be effective in my work.  With that history in mind, the project was a very thought provoking opportunity for me.

For recreation between studies, I took part in a Fletcher student activity, Fletcher Strategic Simulation Society (FS3), where we mainly enjoyed playing board games.  In Japan, most board games are for family parties. especially including small children, and the rules tend to be simple.  When I asked my Japanese classmates to join FS3, they worried it would be a little childish.  But in the U.S., college students enjoy many board games and the rules can be very complex, requiring strategy to win.  This cultural difference is the mirror image of the perspective on manga or anime.  Many Americans think that comics and cartoons are not appropriate for intellectual adults.  By contrast, in Japan, even old or well-educated people like manga and anime, because many are very literary and include social satire.

I like to play strategic simulation games with Fletcher’s future diplomats, officers, and negotiators.  In particular, I was very excited to play “Diplomacy,” which is a classic game dealing with World War I.  Players negotiated, allied, and deceived each other, posing as great powers of the era.  It took more than four hours to complete a game, but I truly enjoyed playing “Diplomacy” with the people of The Fletcher School of Law and Diplomacy.

Also outside of classes, I tried to organize a Japanese Table.  At Fletcher, there are many language and culture tables, and I wanted to make my contribution to the cultural diversity of Fletcher.  Additionally, I wanted to find people who are interested in Japanese language and culture, and to increase the number of interested students.  One of the reasons is that I work for Japan’s Ministry of Land, Infrastructure, Transport, and Tourism.  I regretted that I could not organize the table too many times.  The number of students who participated was not too large — except when we served Japanese cuisines and drinks!  On the other hand, I realized that there are a good number of Fletcher students who are learning Japanese, although the Japanese presence in the U.S. has been dramatically decreasing over the past few decades, compared with that of China and other emerging countries.  I think one of the reasons that it continues as an interest at Fletcher is that many students are focused on security studies. 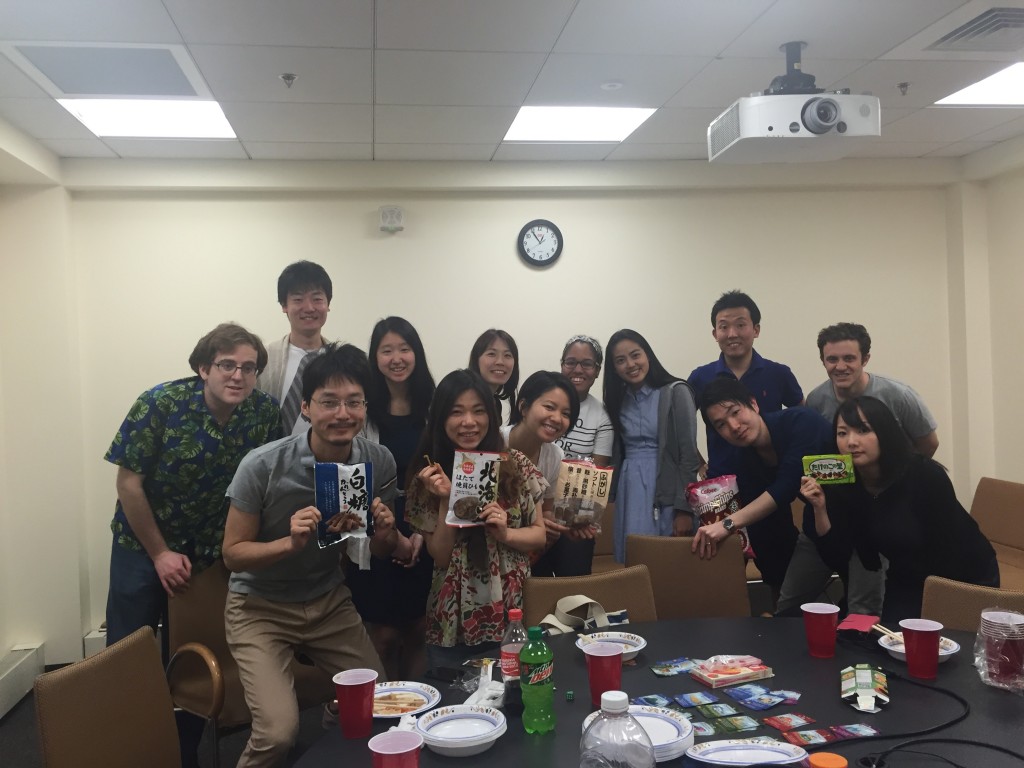 We also have Japanese students at the School, and most of us have worked for the government.  I think it should be our role to build, strengthen, and deepen the community to benefit both our country and international society, by staying connected to people from other countries who are interested in our culture.