I’m going to close out this blog week with the post that wraps up Tatsuo’s Fletcher experience.  It’s hard to believe that I met Tatsuo almost exactly two years ago, and he’s already back in his job with the ministry in Japan that sponsored his studies.  As much as any student I’ve known, Tatsuo made the most of his two years away from the workplace.  He traveled widely in the U.S. and beyond, pursued an exchange semester in Paris, had an internship last summer (relatively uncommon among students who will return to their pre-Fletcher workplace), and while on campus, built community with fellow students interested in Japanese culture and food.  In today’s post, he describes his return to work at the ministry.

Two months ago, I graduated from Fletcher and came back to Japan.  Fortunately or unfortunately, I am readjusting quickly to Japanese life and work.  I miss my days in the school on the hill, but I already feel like they passed years ago.

I’ve settled in Kasumigaseki, the district that is home to almost all Japanese central government agencies, and I am serving as the Deputy Director of the Transport Planning Division in the Public Transport Department of the Ministry of Land, Infrastructure, Transport and Tourism (MLIT).

In Japan, maybe like some other countries, the name of the government district — “Kasumigaseki” — is sometimes used as a word to symbolize “conservative,” “sectionalism,” or “stubbornness.”  However, we, the people in Kasumigaseki, are now facing the tide of many and great social and economic trends. 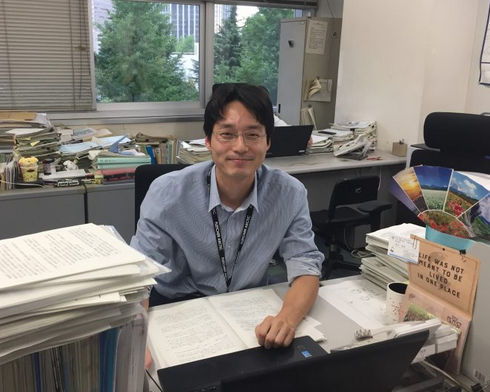 My new position is one of the difficult but interesting positions through which the government is facing change and challenges.  Due to Japan’s aging population and the end of high economic growth, Japanese cities and towns, especially in rural regions, are struggling with economic and social stagnation.  In these areas, public transportation faces decreasing demand.  Many local bus companies will be bankrupted.  Japanese Railway and other railway companies abolished many “unprofitable” routes that are still critical for the local society and economy.  A decade ago, some free-market-oriented policies that eased or abolished governmental regulations to control transport companies accelerated the trend.

My task is to revitalize regional economies and societies such as these to reconstruct the transport networks.  Many bus routes and railways were built in the age of high economic growth.  Most of these networks are inefficient for current demand, while the companies have heavily subsidized them and lost the capability to adjust to social/economic change.  Moreover, there are many innovations on the horizon to bring a new future to public transport, such as automated driving.

This work needs very broad cross-sector approaches and communication.  I am working with many colleagues beyond a single department, ministry, or regional government.  I work with the Ministry of Economy, Trade and Industry, the Ministry of Health, Labor and Welfare, and many businesses to tackle regional transport projects.  This complex approach is needed because we have to connect multiple transport modes, many industries, various technologies, and diverse thoughts.

The position has another unique dimension.  It is very close to “ground-level.”  MLIT is generally field-site oriented: there are tens of thousands of engineers and technocrats, in many branches all over the country, with a big influence on politicians and local governments through the huge infrastructure budget.  However, even in MLIT, such detailed field work that I am tackling is really rare.  For example, I have to check local governments’ transport network plans.  I am sometimes thinking about the location of a bus stop or route because of these very detailed transport network plans.

Although I am enjoying my new responsibilities (while struggling with terrible Japanese working conditions…) some colleagues or friends have said it’s unfortunate that this position is too domestically-focused for a person who just returned from studying in a foreign country.  They said that such a “global” person as me should be appointed to some kind of international work, for example international treaty negotiation, promoting infrastructure exports, or diplomatic postings to foreign countries.

However, in Timor-Leste, Kazakhstan, and many other places I visited throughout the world, I realized a truth.  To be a “global” person, we need to have “local” expertise.

I enjoyed working in Timor-Leste, not because my English was fluent or I had completed a year of studies, but because my transport/infrastructure expertise was very rare and important for the country.

Imagine if I had no expertise in Japanese industries, infrastructure technologies, or at least the culture and the society.  If I had one of those “international” positions, what should I negotiate for?  What should I promote to export?  How could I represent Japan?

Before Fletcher, I was a man who simply adored the image provoked by the words “global” or “international.”  But Fletcher taught me many dimensions of global politics, international business, and the lives of people in the world that I didn’t know.  I didn’t learn only on the Fletcher campus, but everywhere in the world that Fletcher opened up for me, such as Timor-Leste, Paris, Israel, and Central Asia.

My new position will give me very deep and special experiences and knowledge about regional public transport.  Many places in the world have interest in the questions: How can we build a transport network in areas without good economic/social conditions?  How can the public sector and private sector cooperate to manage transport infrastructure while maintaining market competition and people’s welfare?  Therefore I think that while this new position seems to be very “local” at first glance, it can strengthen my “global” career.

So now I am working in Kasumigaseki with big Fletcher pride.  If you visit Japan, please let me know, so we can talk about the hill in Medford.  🙂

And, if you do visit, I also strongly recommend that you stay not only in Tokyo/Kyoto/Osaka.  Please go to our beautiful regions — using public transportation!