I now know that I’ll be sharing four reports from the Arctic Circle Assembly.  Today, adding to the post from Ana last week, we’ll hear from two more students, Katrina (who is one of the active duty military officers at Fletcher) and Colin (who is one of the pioneers in Fletcher’s new Master of Transatlantic Affairs program).

Attending the Arctic Circle Assembly in Reykjavik, Iceland sounded like a fantastic opportunity but one that required some prodding before I committed.  I wanted to attend and participate in every single thing the Fletcher community offered, and the Arctic Circle was no exception.  However, as a brand spanking new first-year MALD student, I was wary of missing classes since I was still (re)acclimating to the schedule and demands of academic life.  Matt Merighi, the Assistant Director for Maritime Affairs, quickly convinced me that this conference is the type of quintessential enrichment that Fletcher students must experience.  So, I prepared myself for what would become one of the best experiences I have had at Fletcher thus far. 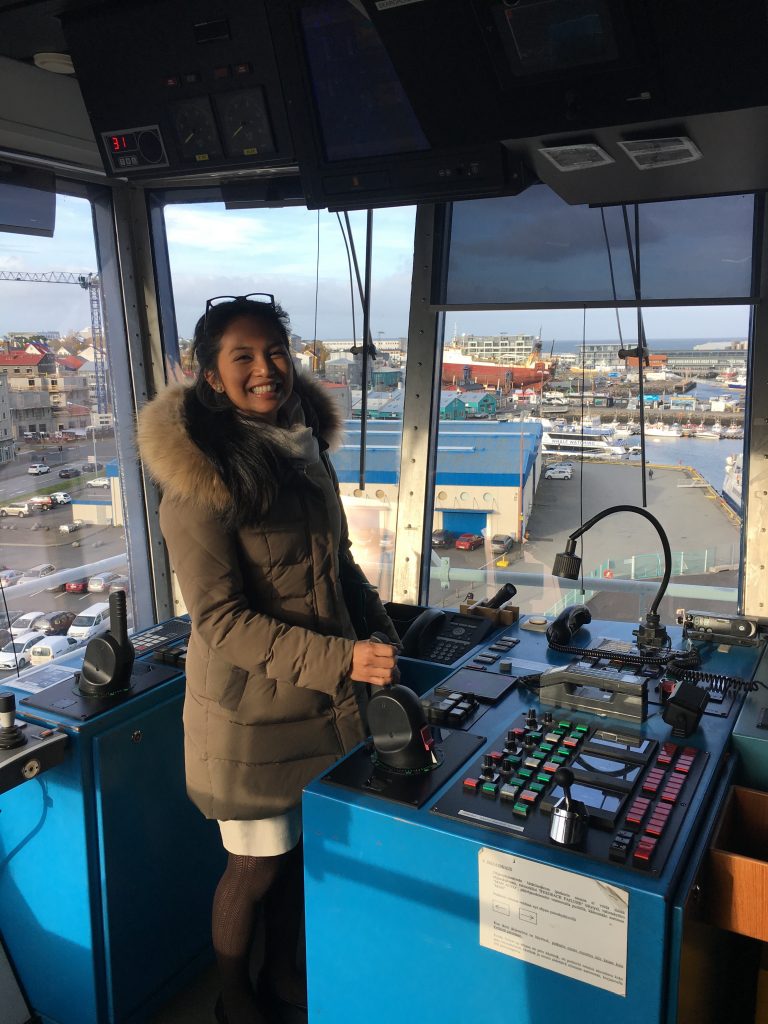 The Arctic Circle is “the largest network of international dialogue and cooperation on the future of the Arctic” with participants including governments, organizations, academic bodies, and others from all over the world.  The Assembly gathers annually during three days in October.  Participants packed the sessions covering the range of issues facing the Arctic.  As a naval officer, I was keen on attending the sessions that dealt with maritime security.  One of the first sessions I attended was “Security and Insecurity in the Arctic and High North: Current Trends and Future Issues,” and I was incredibly impressed with the arguments posited.  I found the geographic and national lenses through which panel members framed the issues concerning the Arctic thought-provoking, and I kept them in mind as I listened to other speakers.  It was a humbling reminder that nations are affected by problems in different ways, and future solutions must account for all parties facing the challenges of maritime security, technology, trade, or any of the other issue in the Arctic.

Because about 2,000 people were in attendance from 50 countries, I was bound to meet fascinating people.  During the opening reception, a gentleman next to me gleefully gave me a Maine lapel pin after I told him I was at Fletcher.  When I asked where he was from, he casually replied: “I’m the governor of Maine.”  I never thought I’d meet the governor of Maine, much less 2,500 miles from home!  I also had the opportunity to engage with the Vice Commandant of the U.S. Coast Guard and the Deputy Chief of Operations of the Icelandic Coast Guard.  Listening to them discuss the most pressing problems they see in the Arctic, and the steps they are taking to address, them caused me to reconsider how I look at maritime security issues, not only in the Arctic but around the globe.  I conversed with academics, fellow students, government officials, and organizational representatives, and I walked away from each conversation having learned something new. 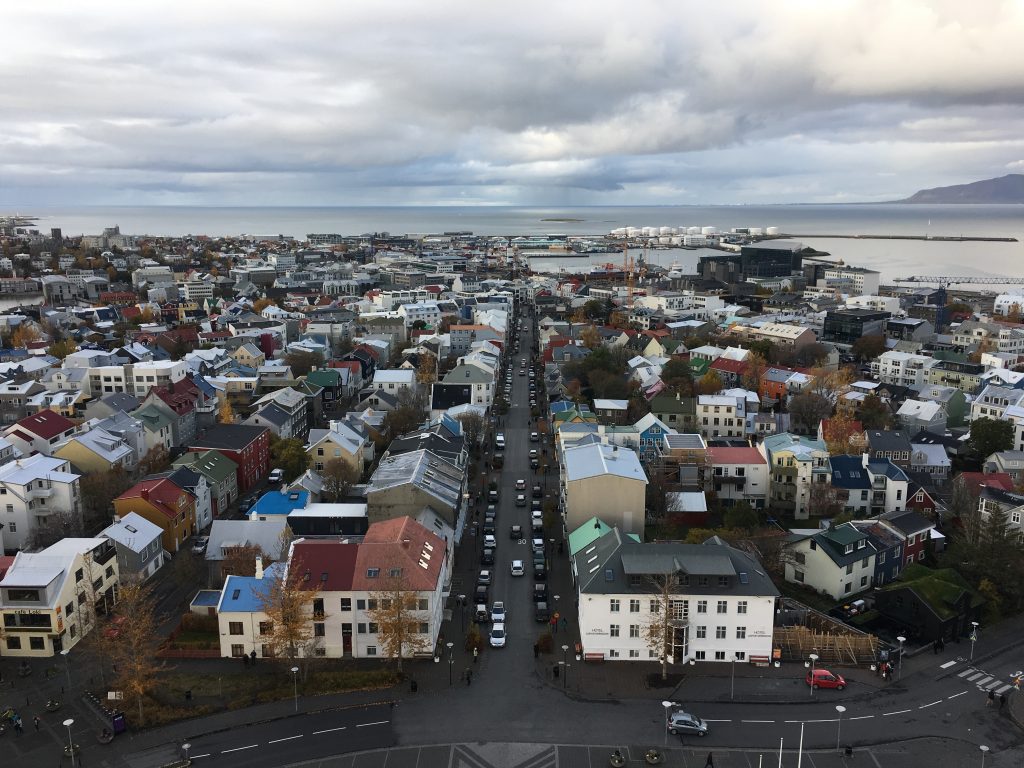 My time in Iceland was not all serious, however.  During the precious few hours I was left on my own, I wandered the streets of downtown Reykjavik and visited key sites and museums.  I went to the top of Hallgrimskirkja Church, where I took in the beauty of the city from 244 feet in the air.  I visited their Culture House, which featured a thought-provoking exhibition that explored how outsiders and Icelanders look at history and society in Iceland.  Yet, the highlight was visiting the world-famous Blue Lagoon, where I soaked in an outdoor hot spring and watched the sunrise while wearing a silica mud mask plastered to my face.  This was unquestionably a once in a lifetime experience.

One of the most important things I learned during the Assembly is that the Arctic embodies a new frontier of international collaboration.  In an increasingly polarized world, I am encouraged that the Arctic engenders discourse and a collective action among countries that would not typically interact otherwise.  It turns out Matt was right — this was an incredible experience.  I look forward to sharing the spirit of Arctic Circle with the Fletcher family and hopefully convincing them that Arctic Circle Assembly is a must-add to their list of Fletcher memories!

I have long been fascinated with the Arctic, and my time at Fletcher has only further cemented this interest.  As a student in the brand-new Master of Transatlantic Affairs program, focusing primarily on international security and the EU, the region represents a fascinating case study.  Will new opportunities in shipping and resource extraction lead to tense geopolitical competition, or to peaceful and cooperative development?  Thanks to the generosity of the Maritime Studies program, I was granted a chance to travel to the Arctic Circle Assembly, the preeminent conference for Arctic affairs, to find out. 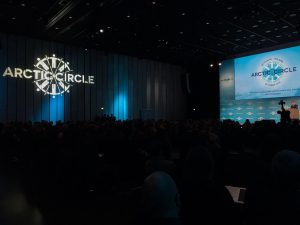 My interest in the region began as a personal one, but was expanded through various research projects, including an op-ed I published while working at The Stimson Center, a think-tank in Washington, D.C.  As the article was about the possibility of militarization in the region, I kept a close eye out for Arctic conference events that discussed similar issues.  Fortunately, I was able to attend a talk by a researcher from the University of Saskatchewan who laid out the arguments for demilitarization in the region, arguing that, for the most part, countries have compatible interests in the Arctic, and that military investments should be seen as a misallocation of funding.  Instead, she urged Arctic nations to focus on confidence-building measures, particularly by creating a political forum to discuss security and demilitarization.  Our discussion with Admiral Charles Michel about the Coast Guard’s surprisingly diplomatic role in the region was another interesting perspective on Arctic security cooperation.

My interest in the EU was well-represented as well.  In a presentation on EU Arctic policy, I learned how Europe is approaching the region, particularly through the EU Arctic Cluster, a network established to link policy makers with other groups like indigenous peoples, civil society, and business representatives.  I was also fascinated to learn about the EU-Polar Net, the European Union’s consortium of science experts, which coordinates numerous European research projects.  It was impressive to see the degree to which the EU was already cooperating in the region. 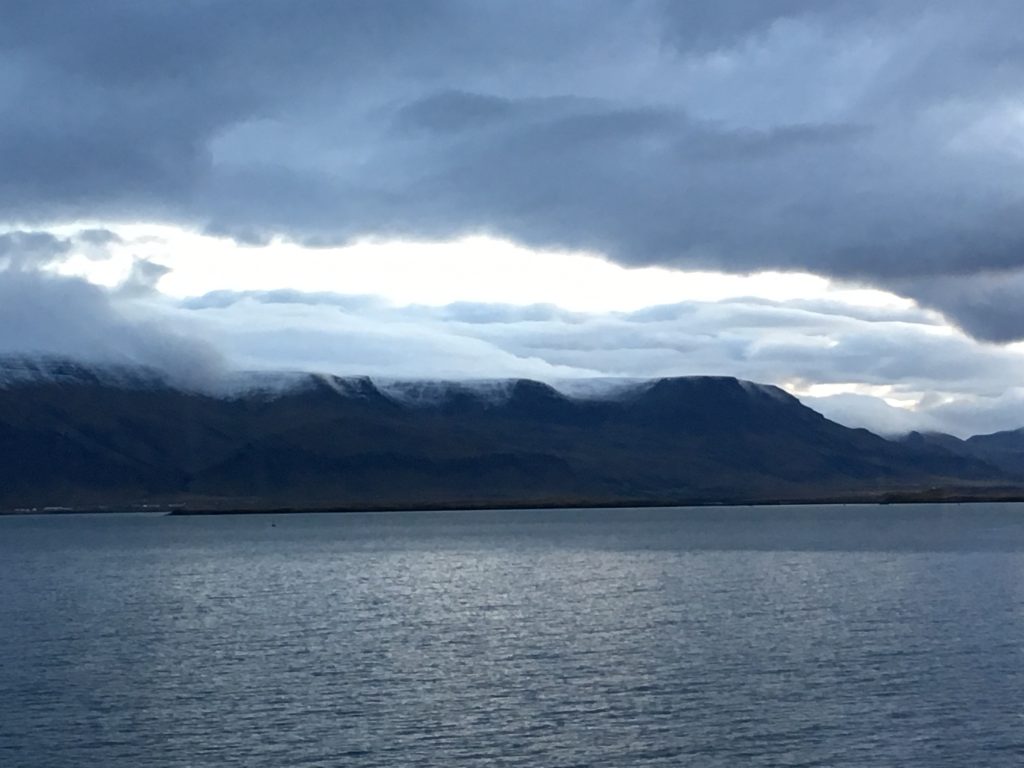 True to Fletcher style, I also did my best to take an interdisciplinary approach to the conference, rather than simply focusing on my core academic interests.  Easily my favorite event was the Arctic Innovation Lab, where students from Fletcher, the Harvard Kennedy School and Reykjavik University presented their ideas for concrete improvements to the region, from transshipping ports to indigenous-run tourist businesses to an Arctic investment index.  I was very impressed by my fellow students’ ingenuity.  At another event, a professor from the Arctic University of Norway opened my eyes to the human security element of Arctic affairs by arguing that the common suicide crisis within Nordic countries actually constitutes a security issue in itself.  Another panel discussed environmental hazards in the region, in particular a fascinating presentation about the dangers of a particularly toxic fuel called unsymmetrical dimethyl hydrazine, which was recently used in a Russian satellite launch despite its dangers to human health and the environment being very well known.  I was also pleasantly surprised to see the variety of delegations from non-Arctic countries, especially Asian countries like China, India and Japan, and attended a number of events where they laid out their interests in the region.  As a student who primarily focuses on transatlantic affairs, it was a tremendous opportunity to be exposed to perspectives from other parts of the world.

The conference was not only fascinating from an academic perspective, however.  It also provided the opportunity to get closer to my fellow Fletcher students, and make some new connections as well.  Most memorably, two other Fletcherites and I were fortunate enough to befriend a student from the University of Reykjavik, who gave us a ride away from the light pollution of the city to see the awe-inspiring northern lights.  It was just one of several unforgettable experiences I had while attending the Arctic Circle Assembly.