Alongside the last day of classes today, the blog’s Student Stories writers are wrapping up their commitments for the year.  Gary, our writer from the PhD program, is naturally looking ahead to the writing of his dissertation and some pre-research research was involved.

You may have heard the rumor before.  A student puts hundreds or even thousands of hours of work into formulating, researching, analyzing, writing and finally defending their doctoral dissertation…only for it never to be read by anyone outside the dissertation committee.  To put lie to that falsehood, I plumbed the depths of the Fletcher dissertation archive held at Ginn Library.  I selected from the hundreds of available dissertations by picking those written by people with whom I now have or previously have had a connection.  For some writers, I have been their student somewhere along the line or they are fellow military officers (active or retired); and for others, I used their research as a resource to prepare for military operations I have personally participated in.

Just to be clear, I didn’t read the dissertations I picked out from cover to cover — after all, some of them exceed 500 pages in length.  I mainly read the abstracts and the front matter to get a sense of where the writers, some now notable members of the commentariat, government, think tanks, and so forth, were in their personal journeys while writing their Fletcher dissertations.  It was an intriguing experience that I may repeat in the future because I felt like there was a lot more to discover.

With those introductory remarks out of the way, I’d like to provide some general macro-level comments about the nine dissertations I examined for this post.  The first notable feature of many of the dissertations was the inclusion of a curriculum vitae or CV.  Invariably, these are interesting time capsules of a sort.  Looking at where the writers were long ago in their personal journeys makes it easier to imagine a similar path forward for those of us studying at Fletcher today.

Some dissertations include an acknowledgments page, from which it is notable to see the personal connections and broad support required to complete any such project.  Often, the authors list out their closest colleagues from among their PhD cohort, and I can imagine those groups of former students studying, debating, and analyzing together in the same spaces in the Fares PhD Research Center under Blakeley Hall where our current crop of PhD candidates does the same thing.

Finally, it’s easy to notice that the physical bulk of dissertations has changed over time.  In years past, dissertations were printed only on the fronts of each leaf of paper, leaving the backs blank.  This made for some massive tomes, the shelves groaning under their weight.  More recently, as the available shelf space for Ginn’s green monster has dwindled, dissertations are now printed on the front and back of each page, making for far more slender volumes.

Moving on to the three dissertations I want to examine in greater detail today, the unifying theme is that they were all written by current members of the Fletcher faculty or staff.  I am compelled to start with Dean Stavridis’s 1984 work, not only because he is the head honcho of the school, but also because of the unique marking on its front cover.  I would wager that it is one of the only, if not the only, Fletcher dissertation whose demand might warrant such a marking.

Dean Stavridis’s 1984 dissertation was entitled “Marine Technology Transfer and the Law of the Sea,” and it tipped the scales at an impressive 529 pages.  I’d say he was ahead of his time in seeing the intrinsic value of the Law of the Sea treaty and suggesting ways in which it could be improved to increase the chances of full Western (read U.S.) buy-in/ratification, but that wouldn’t be a surprise.  Our dean is characteristically ahead of his time on many issues, which I think we will eventually see in cyberspace and the idea of a new triad consisting of cybercapabilities, special operations forces, and unmanned platforms, among other topics.  Like me, Dean Stavridis attended Fletcher as an active duty military officer. 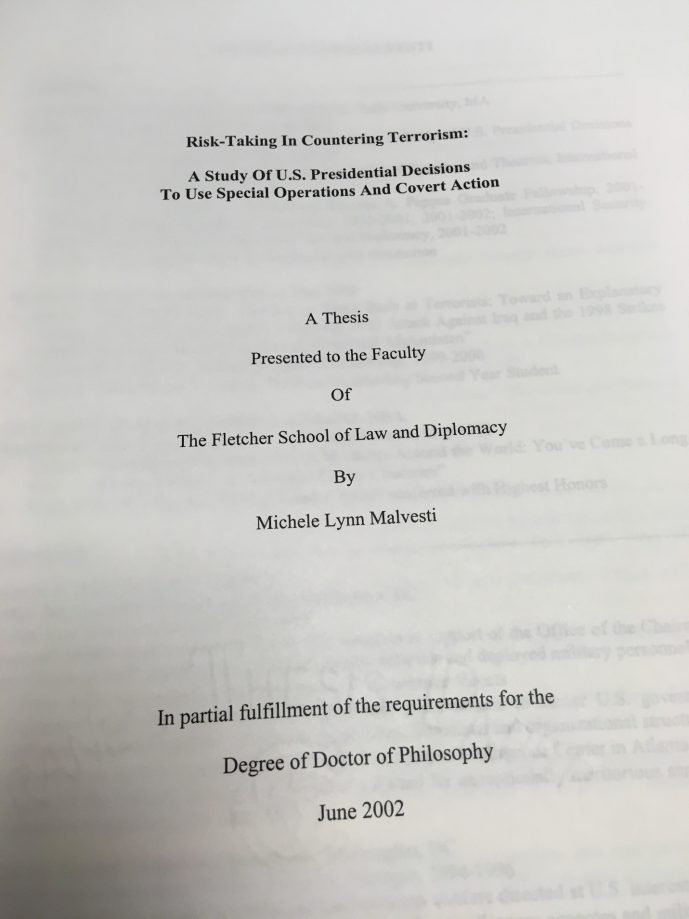 Next of the reviewed dissertations is Professor of Practice Michele Malvesti’s 2002 work, “Risk-Taking in Countering Terrorism: A Study of U.S. Presidential Decisions to Use Special Operations and Covert Action.”  Her dissertation is an examination of prospect theory as applied to decisions to conduct counterterrorism missions during the Carter and Reagan administrations.  An interesting note: Professor Malvesti went directly from completing this PhD to working on counterterrorism issues on the National Security Council Staff for five years and, as a result, she is an example of a great resource who has “been there, done that” at very high levels of the U.S. government.  I was fortunate to take her National Security Decision Making course last semester, and I found it to be very engaging.  Bridging the gap between the policy world and academia, the course is loaded with top-notch guest speakers, contacts of Professor Malvesti from her time in government.  Last semester we heard from the commander of the U.S. Special Operations Command, the director of the National Counterterrorism Center, the Assistant Washington Editor for The New York Times, and many more.  For those reading who will someday attend Fletcher, I highly recommend the course. 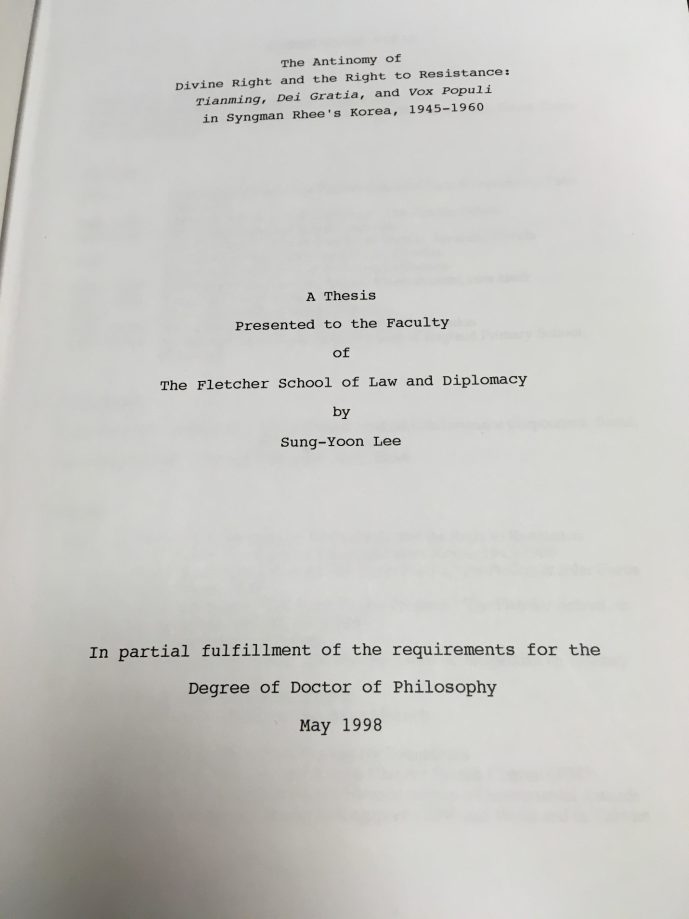 Last for today, a look at the 1998 dissertation of Professor Sung-yoon Lee, “The Antinomy of Divine Right and the Right to Resistance: Tianming, Dei Gratia, and Vox Populi in Syngman Rhee’s Korea, 1945-1960.”  It is an examination of the seemingly opposing forces of Confucianism and democracy in Korea during this period.  I am currently a student in two courses with Professor Lee and last semester I took another one of his courses.  (One of my concentration areas at Fletcher is Pacific Asia, and my dissertation research is related to China-North Korea relations, so it makes sense that I would take many of his courses, as he is one of American academia’s premier Korea experts.)  With the shifting relationship between the U.S. and North Korea throughout this academic year, it is not surprising that Professor Lee has been in great demand as a live commentator on numerous television and radio programs.  He records many of these from Fletcher’s world-class television studio, part of the Edward R. Murrow Center for a Digital World.