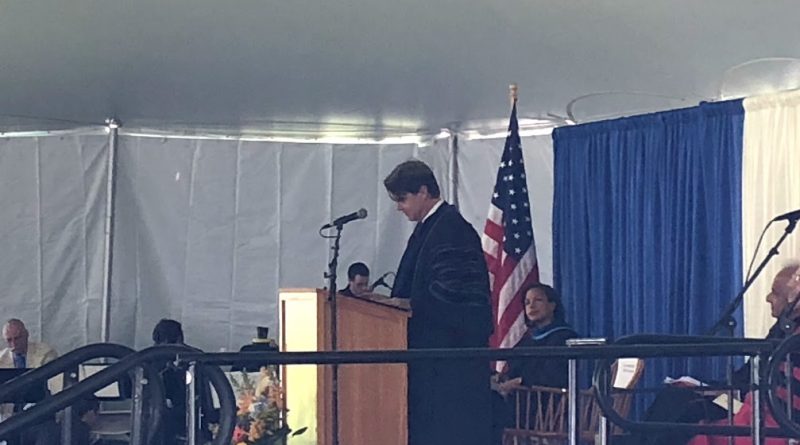 About Fletcher General Admissions News Our Alumni Our Students
May 20, 2019May 20, 2019 Daniel Birdsall 589 Views Commencement 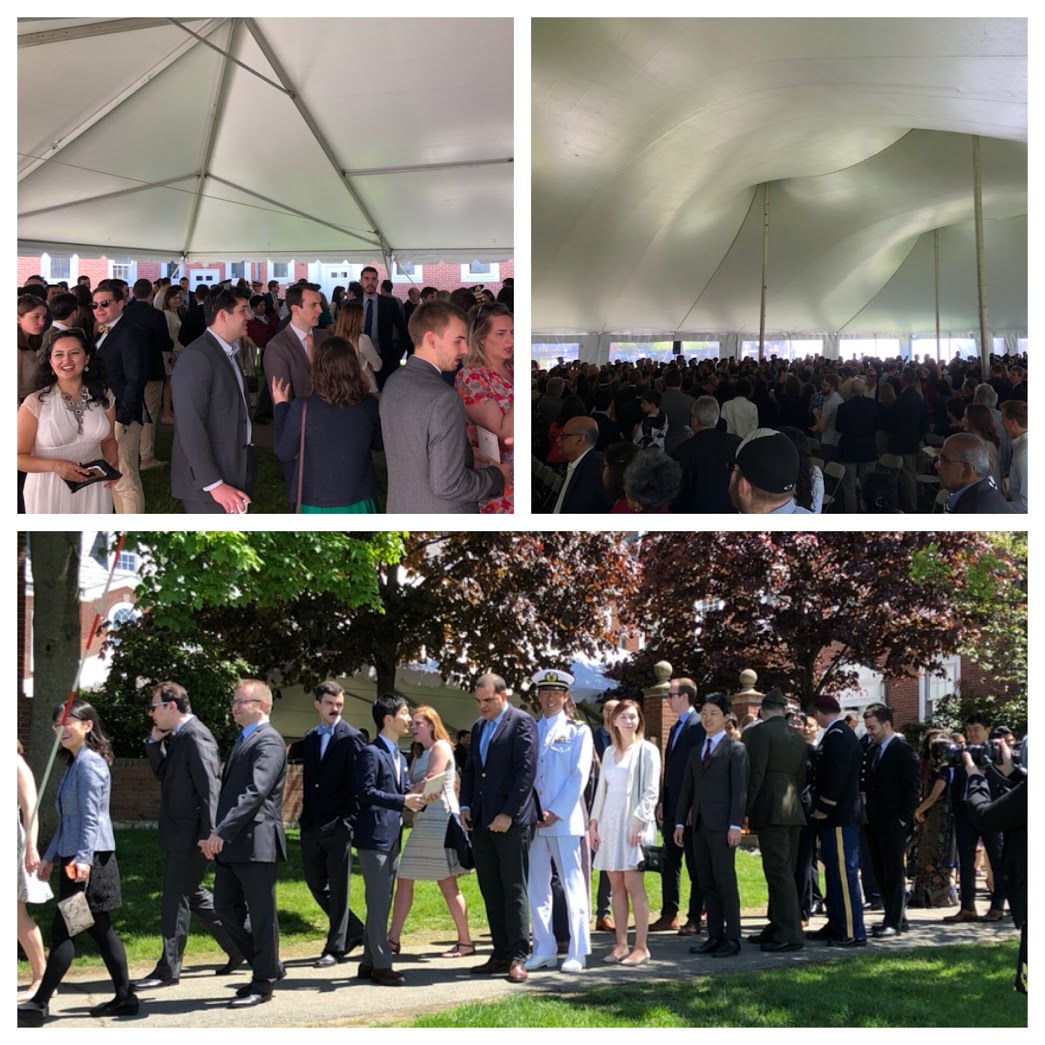 And just like that, members of the Fletcher Class of 2019 are officially alumni! It doesn’t seem that long ago that we were busy convoking the academic year, and here we are already recapping the season’s most anticipated finale outside of Westeros. On the weather side of things, there’s mixed news to report. For Saturday’s Class Day festivities, we lucked into probably the nicest day we’ve had all spring. Sunny, warm, and just generally the kind of day that makes you want to hang around outside. For Commencement itself on Sunday, less so. While the big tent provides good protection from the vicissitudes of the sky, the ground makes itself felt in a downpour, too, and there are likely a few muddy pairs of Maglis and Manolos due for a cleaning this week.

So one perfect day, one kind of cruddy, but smiles, hugs, and good times throughout! I feel especially lucky for all the friends I bumped into, both expectedly and unexpectedly. Anticipating some pretty full parking lots at Tufts, I dumped my car in Davis Square, and who should I see walking by just as I was parking but my friend, former colleague, and blog mentor Jessica! We had a nice chance to catch up a bit as we wandered up the hill, and were both delighted and surprised to run into Cece, whom we know well from her work in our office for the past two years, and her sister-in-law Dristy, likewise a Fletcher alumna (F17), and likewise an Admissions Graduate Assistant Emeritus. I’m pretty sure it’s the first I’d seen Dristy since her own graduation, and it felt like a special treat to bump into her.

Commencement weekend is a dizzying affair, largely consisting of quick hellos, congratulations, handshakes, and well wishes as people are pulled simultaneously in many directions. I glimpsed Markian and Ella, both of whom I met as prospective students long before their enrollment at Fletcher, both of whom are somehow already finished with their time here. I saw Nurik, himself now graduating a few years after his older brother also passed through Fletcher, and Kudrat, an Admissions familiar who worked with us on Admissions Committee, now graduating from the one-year LLM program in what feels like the blink of an eye. I managed a quick congrats to Rami, another Admissions Committee veteran, now on the cusp of beginning his Foreign Service career. I had the great pleasure of bumping into Daniel, yet another former student member of our Admissions team, back from San Diego for his fifth year (fifth year!) reunion. Also our friend Molly, dependable to volunteer for pretty much any need of our office, who somehow graduated a whole year ago, though it feels like yesterday. 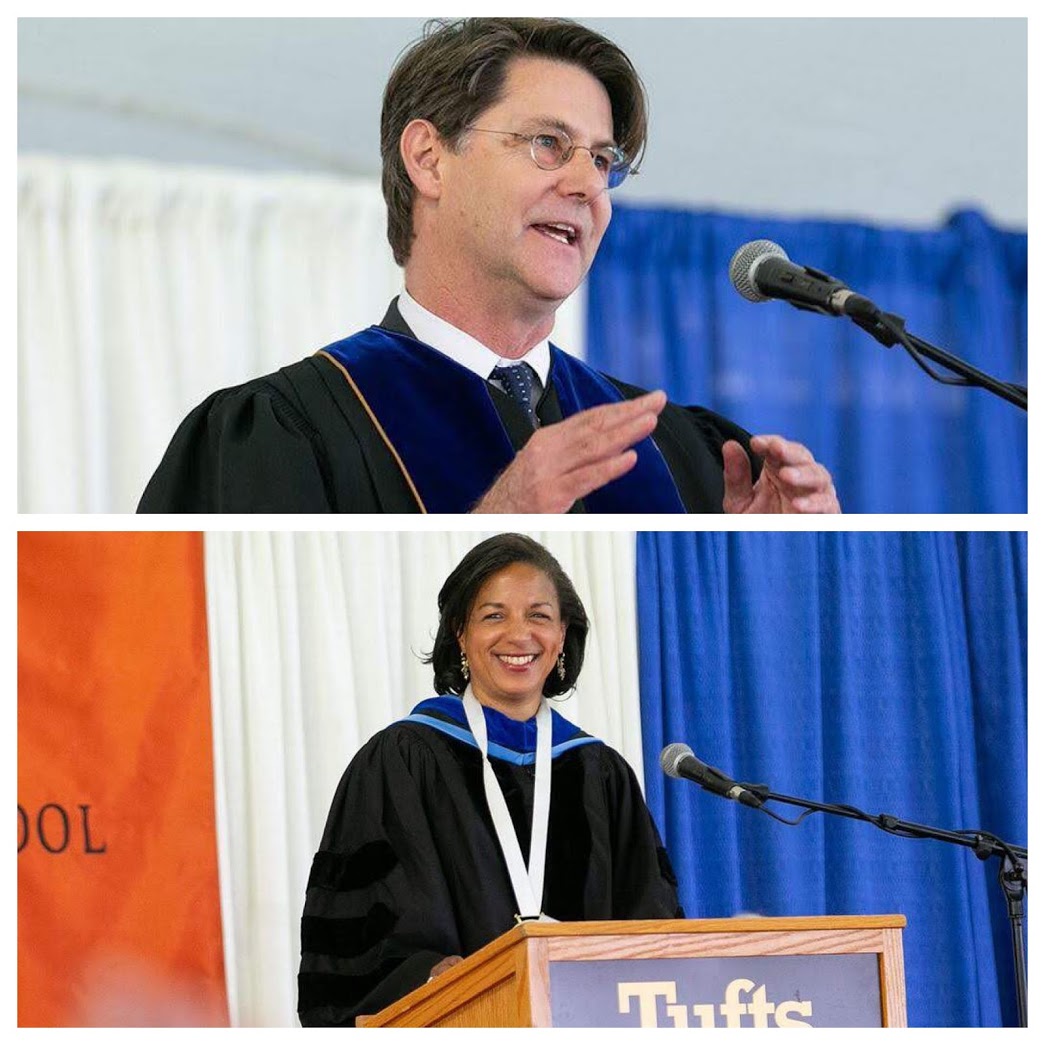 There were actually formalities to attend to in the midst of all this hubbub, too. Dean Johnstone welcomed and congratulated this year’s grads, and introduced featured speaker Ambassador Susan Rice, who exhorted students to prepare themselves both personally and professionally for service-oriented careers. There were a variety of academic prize presentations, including of the Paddock Teaching Award to Professor Kimberly Theidon. There was, of course, the procession of proud graduates across the stage to receive their well-earned diplomas, and their equally proud friends and family there to witness the occasion. There was the reception in an adjacent tent, the festive atmosphere of which was little dampened by the deluge outside.

And now, the crews have already arrived to strike the tents and remove the chairs, and the first of the summer hush has descended on the halls of Fletcher. A handful of current students will remain in the area over the summer, and we’ll see several more of them throughout the coming months as we hold Admissions events in New York and DC. Here in Admissions we’ve got a lengthy summer to-do list, and something tells me it will feel like barely any time at all before the Hall of Flags is once again buzzing with new and returning students. For the moment, though, congratulations and good luck to the Fletcher Class of 2019!