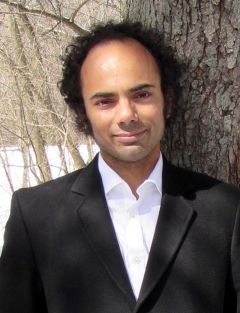 I was delighted recently to hear from my colleague and friend Prof. Sulmaan Khan. A former faculty member of the Admissions Committee, ready volunteer for all our team’s requests, and (most importantly) a fan of my dog pal Murray, Sulmaan has long been a friend of the Admissions Office. As you’ll see, he’s fortunate to have a personal interest that’s still possible to pursue during quarantine:

I’d promised you a blog post, as you’ll recall, but just never found the mental wherewithal to compose a proper one. The idea had been in part to share what life in the age of corona was like (and in part to check in, as we used to, about Murray and work and students we knew and the best restaurants in town as we did in our admissions meetings), so perhaps you’ll let me take the liberty of turning this note to you into a post?

There have been many changes to life, of course, but the biggest one perhaps has been the absence of a clear wake up time. I used to get up at 4 in the morning on a regular basis and stare out at the tree, while Koshka the cat, my co-conspirator and comrade in arms, sat next to me in purring ecstasy (in her world, everyone should be up at that hour). The lockdown has meant that the hours, days, weeks, months have run into one long, barely distinguishable blur and hauling myself up in the morning seems pointless. These last two days I got up at 5 though and Koshka, who had been most disapproving of my laxness of late, was delighted. “This, THIS is as it should be,” she trilled. Not being able to interfere with writing these days (I’m in the gathering phase), she has taken to hunting while perched my on chest, looking in murderous fantasy upon the robin who has taken up residence in the tree outside and the squirrel who hops by. (Koshka, like yours truly, has never lacked for confidence; I once saw her mentally preparing to spring on a passing bald eagle when we lived in New Haven. Fortunately, there was a window between her and the bird. I’m not sure the eagle would even have registered her eight pounds of fur).

Speaking of birdlife, that has been one of the saving graces in all this. A pair of Cooper’s hawks has started nesting near us—my biggest pandemic accomplishment was figuring out where nest was—and Anna Beth and I check up on them quite regularly. We’ve seen the larder where they stash prey (you don’t want it in the nest lest predators come check it out) and watched the male drive away a raven who was much, much larger than him. With the turned-down volume of fewer cars, the birdsong became cacophonous: partly because the birds were calling more with the sound interference out of the way, partly because we were just hearing them better too. There are cardinals and robins and downy and red-bellied woodpeckers and goldfinch (I’ve watched the last duke it out up and down the street) and chickadees, with the occasional flock of cedar waxwings and a sprinkling of pine warblers. Once, on a solo trip to Manomet Point, I spotted a right whale off the coast. As I write this to you, I realise that for all my stir-craziness, the lockdown hasn’t been altogether bare of joy.

I’ve been reading quite extensively. I read Eugenie Clark’s memoir, LADY WITH A SPEAR, (Clark was who I wanted to be when I grew up), Helene Hanff, 84 CHARING CROSS ROAD (which is absolutely wonderful), Hilary Mantel’s latest (where you also have an epidemic), and various books of natural history. (Most memorable fact gleaned in all this comes from George Schaller’s stimulating new book on Mongolia: there is a type of tick that will actually chase you across the ground. You thought you’d be safe in rocky desert, but go figure).

I taught my last Zoom classes yesterday. For all the dire warnings that the internet would break down and Zoom couldn’t hold up to everyone using it, this worked out much better than expected/feared. It’s not what it would be in person, of course, but being able to have regular discussions with my students was a sanity-saver; it gave some shape to some days and their education didn’t crumble altogether. The students rose to the occasion magnificently (I was talking to a colleague at another university and he vowed to deal harshly with anyone who ever called this generation “snowflakes” again). They’ve been good-humored, understanding, and resilient, working as hard as one could ask and in some cases harder. One of them even saw fit to check in on how I was doing, which was deeply touching. The hardest part was the last class and not being able to say goodbye in person.

The hawks are calling to me, so I will be on my way now (one can still prowl the streets in mask and at the requisite six feet from other people). Here then is your blog post. Give Murray a pat from me. Tell Jessica that I am once again late on a promised blog post, but at least got it in. Tell Laurie that I hope this goes some way in simulating our conversations in the Hall of Flags, though I know it’s not the same. Stay well, all of you, and see you on the other side of this.