One of the perks of working (or studying) on a university campus is that there’s all sorts of interesting stuff going on that may have nothing to do with my day-to-day.  An example: One afternoon last week, I walked out of the office and five minutes later was standing in Tisch Library (the main Tufts library), checking out an exhibit of the photography of Robert Frank.  This “pop-up” exhibit, with books, videos, and photographs spread throughout the main level (including in the Tower Café), has gained quite a bit of attention, and was a great way to connect with Frank’s work.  (Apologies for my less-than-artistic photos, taken on my phone.) 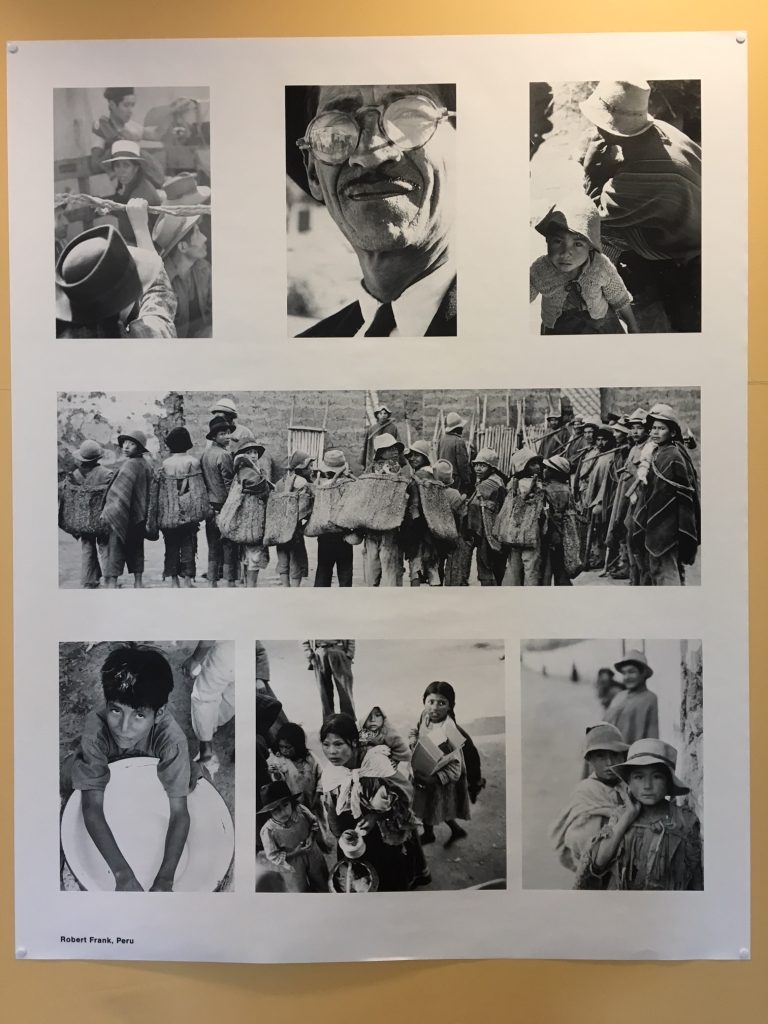 From Tisch, I wandered further down the hill and, another five minutes later, I was at the Aidekman Arts Center, where I wanted to check out one exhibit, but ended up visiting four.

The first, which awaited visitors barely inside the door, displayed photographs from the Philippines by one of the university’s staff photographers, Alonso Nichols.  (Nice overlap between art and international concerns.) 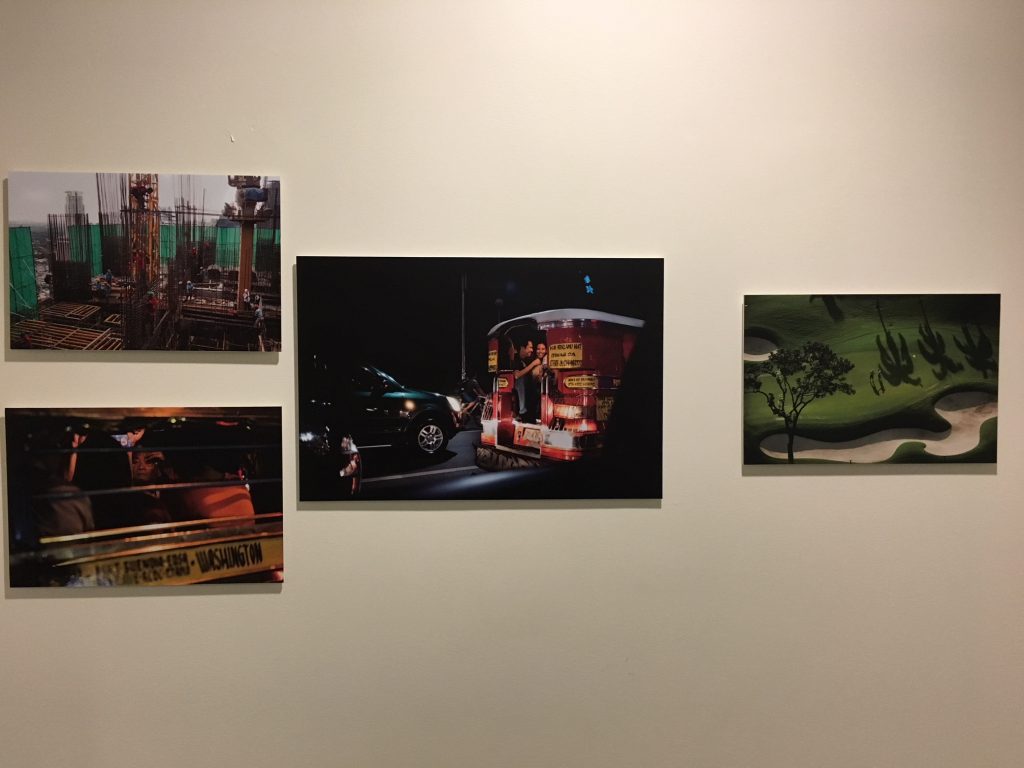 The second was a small exhibit of photographs of South Asia connected with a Kashmir Conference.  This photo was taken by Professor Ayesha Jalal. 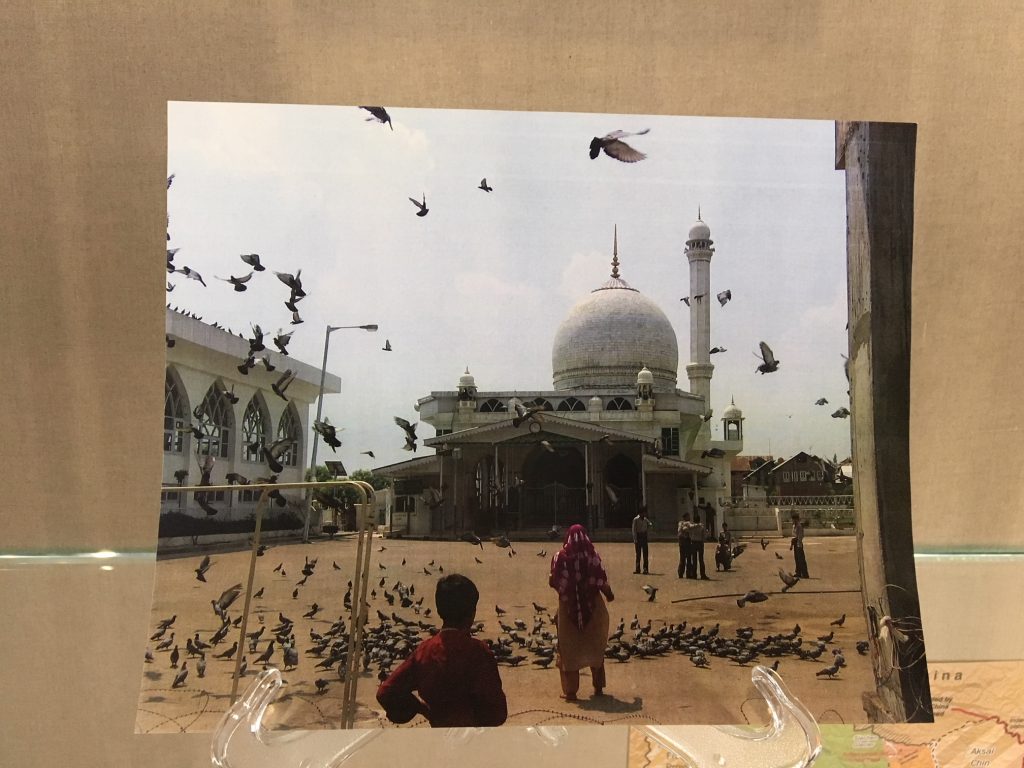 Next up was a display on either side of a hallway, titled “Pilgrim Father/illegal son,” comparing the experiences of William Bradford, who traveled to what is now Massachusetts aboard the Mayflower, and a recent Chinese immigrant, who like Bradford, arrived without official documentation.  The artist, Wen-Ti Tsen, spent time in residence at Tufts this semester, but the exhibit has traveled.  Here is Wen-Ti Tsen’s description of his work. 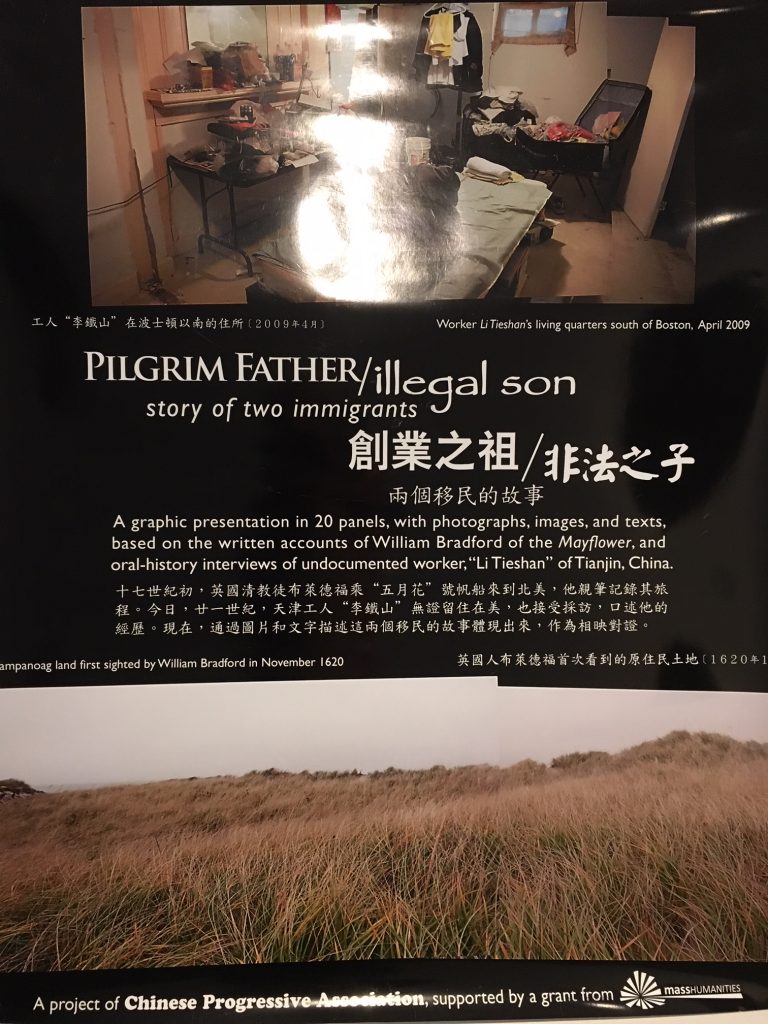 Finally, I reached my original destination, Aidekman’s main gallery, where the featured display was a full-room mural by Chinese artist Yuan Yunsheng.  Yuan spent time at Tufts in the 1980s and painted a mural within Wessell Library.  The larger Tisch library was built around Wessell, but the original wall on which the mural was displayed doesn’t exist anymore.  Neither, it turns out, does nearly any other Tufts wall large enough to display the mural.  Segments of the mural have been exhibited in recent years, but the remainder has been kept in storage.  For the new exhibit at Aidekman, the mural was displayed in full on the only wall at the University large enough for it.  Curiously, it has a door cut into it, representing where there would have been a door in its original Wessell Library site.  The articles I’ve linked to have some photos, but here’s a piece of what I saw. 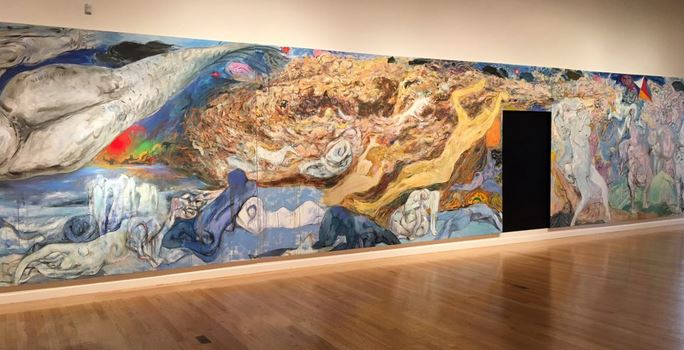 I’m going to try to get back to Aidekman for another visit to the mural.  By the time I had visited Tisch and the other three Aidekman exhibits, I wasn’t left with much time, but I’m glad to be able to give you a sense of the vibrant campus arts scene.  And if you happen to want to know more about Yuan Yunsheng, here’s a video from the Tufts Digital Design Studio.