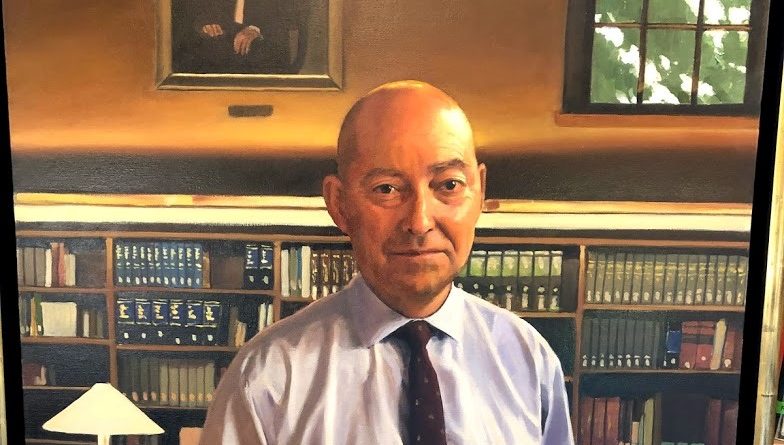 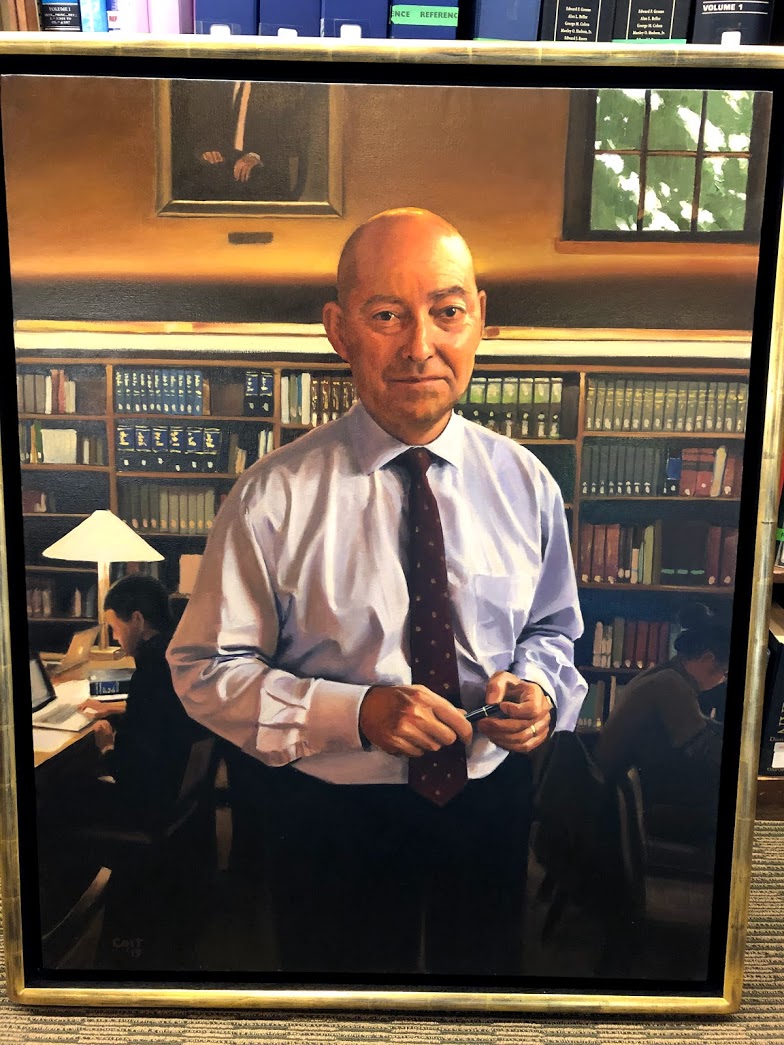 The official portrait of former Fletcher Dean James Stavridis was recently unveiled in a ceremony here, which the Dean himself attended. While I wasn’t able to make it to the event, I did get a chance to check out the latest addition to the Ginn Library Reading Room recently, before it gets hung to join other Deans past. It’s a good likeness, as we’d of course expect an official portrait to be. Having had the opportunity to get to know Dean Stavridis relatively well, I immediately noticed a few details and artistic choices that capture his particular bearing and personality.

Instead of the traditional setting – seated alone, in an armchair, with a touch of patriotic or academic regalia in the background – Dean Stavridis is pictured standing on the floor in the very room in which his portrait will hang, among students hard at work in the background (I’m told his is the first portrait to feature an image of a laptop). While he kept the typical frantic schedule of an institutional leader and had huge demands on his time, I was always struck by how frequently we’d see Jim (as he insisted everyone call him) around Fletcher, by how quickly he knew everyone’s name, and by how generally present he was around the school; Jim was definitely not a lead-from-30,000-feet type. The jacket-less depiction is also deliberate. In addition to several large-scale strategic achievements (the introduction of a gender analysis field of study, the deepening of cyber-security curricular offerings, and significant diversification of Fletcher’s faculty, to name a few), Jim’s tenure was marked by a day-to-day accessibility that I imagine to be somewhat unusual among institutional leaders. You’d be just as likely to see him pop into your class or office unexpectedly to say hello as you would to see him providing commentary on a national news program, or to read about him giving an Important Speech to Important People in DC or London or Dubai.

Lastly, the Dean stands in front of the official portrait of Ambassador Theodore Lyman Eliot, Jr., who presided as Dean of Fletcher from 1979-1985, a period encompassing Stavridis’ own time as a Fletcher student. His portrait will hang next to Eliot’s in the reading room. Perhaps a recent student and future Dean will one day stand for a portrait in front of Stavridis’, deepening the hall of mirrors effect? Only time will tell.