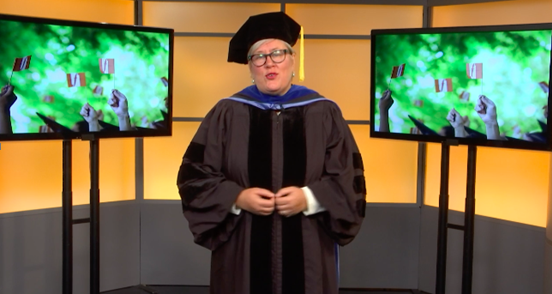 Another Commencement, come and gone. This one, clearly, was different than the usual affair, but may prove to be one of the more memorable in recent memory. I’ll take the opportunity here to vicariously toot the horns of all those involved in pulling this event off, as they’re too modest to ever do so themselves. I was immediately struck by the professionalism of the virtual ceremony, and the obviously huge amounts of work involved in bringing it to life. Seamless transitions, all involved ready to hit their marks, and real-time captioning made it the best possible version of itself.

Dean Kyte, in her graduation finery, kicked things off with welcoming remarks, invoking a particularly apropos sentiment from poet Phillip Larkin: “life has a practice of living you if you don’t live it.” Chair of the Board of Advisors Liz Tarlow noted the similarities of the present moment

in higher education to the spring semester of 1970, when many universities closed for the remainder of the year in the wake of the Kent State shootings. Alumni speaker Jordan Fabyanske (F10), currently a Global Operating Partner with Dalberg Advisors, recalled his own feeling of disruption and uncertainty in attending Fletcher and career planning during the 2008 financial crisis. The overarching message from all: this too shall pass, and moreover, the work of new Fletcher graduates and alumni in a variety of institutions will be at the heart of ensuring that it does. 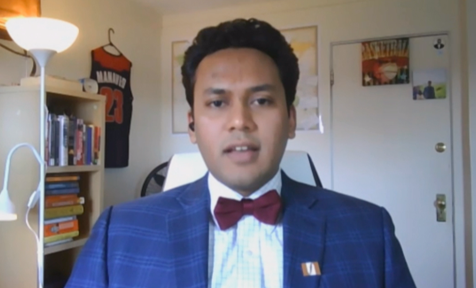 This blog’s very own Manaved was among the student toastmasters. He noted the universal Fletcher truth that “the student body is broken up into two groups: those who could wake up in time for Role of Force, and those who could not,” about the popular course that always begins at 7:45 AM. Yet both sides of that binary, he continued, are united in their sense of gratitude at being part of such a vibrant community, no matter the circumstances. Assistant Professor of Cybersecurity Policy Josephine Wolff, receiving the James L. Paddock Teaching Award, noted how pleased she was to be there, by which she meant “via the packets arriving in your home via the internet protocol I’ve spent so much of my life studying.” Clearly at least some of the Fletcher community was right in its element.

Given our druthers, we’d have all been out on Fletcher field enjoying a warm, sunny (maybe?) spring day together. As a next-best alternative, though, this year’s Commencement still captured a warm and celebratory spirit. Congratulations to all our graduating students and honorees!

(You can check out the full event here.)